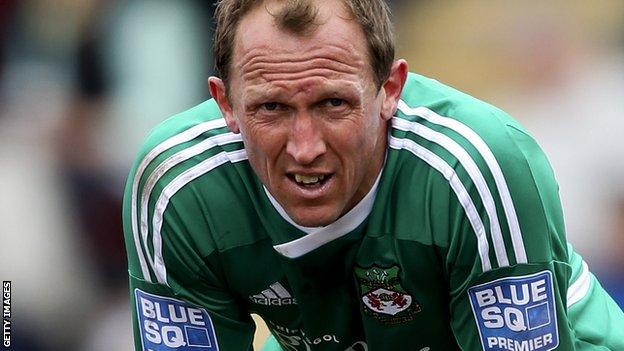 Player-manager Andy Morrell was pleased with Wrexham's second half performance at FC Halifax Town despite a 3-2 defeat.

Newly-promoted Halifax came back from conceding an early goal to beat 10-man Wrexham in the Conference Premier.

But Morrell refused to be too downbeat despite witnessing Wrexham's first league defeat of the season at the Shay.

"With 10 men against 11 it was really difficult.

"If we play a tempo like that and the urgency for a full 90, I think we'll destroy teams in this league.

"The damage was done in the first half and we needed to get to half time at two-one.

"I am asking the same questions, why have we gone like that in the second half and not in the first.

"But I can't believe how good we were in the second half."

Simon Ainge's own-goal gifted Wrexham the lead on 22 minutes, but Lois Maynard replied with a header from a rebound off the bar, the first of three goals in nine minutes at the end of the first half.

Lee Gregory struck a third after Joslain Mayebi saved his initial shot and Halifax held on, despite Adrian Cieslewicz pulling a late goal back.