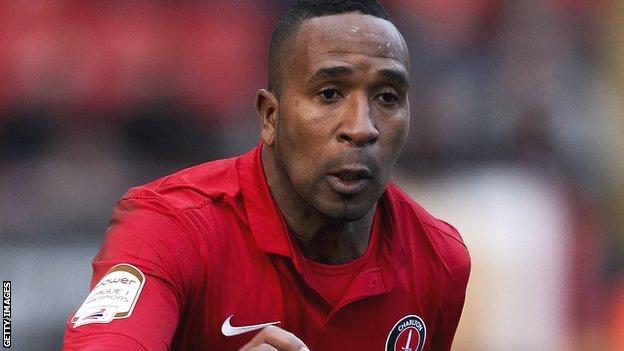 The Jamaica international, 33, was after one season at the Valley.

Blackpool, who have won their first two matches of the Championship campaign, are the eighth English club of Fuller's playing career.

He will compete with summer arrivals and for a first-team spot.

In six years with the Potters, Fuller scored 50 goals in 208 appearances.

He won promotion to the Premier League with Stoke in 2008 and played in the Europa League during his final season at the club, although a knee injury prevented him from featuring in the 2011 FA Cup final against Manchester City.

Fuller, who has the option of extending his stay at Bloomfield Road into a second season, told the club website: "As a striker, we live and die by scoring goals or not scoring goals.

"Hopefully, I'll continue to do my best and score goals, create goals and make something happen for the team."

Fuller said playing for Blackpool boss Paul Ince was a big factor in his decision to sign, adding: "He's been at top clubs and any player in my shoes, or any shoes, would want to play for a manager like that."

Fuller began his career in English football with Crystal Palace and, after a spell in Scotland playing for Hearts, he joined Preston and scored 31 goals in his two years at Deepdale.

Short stints at Portsmouth and Southampton followed, as well as a loan at Ipswich, before he enjoyed arguably the most successful period of his career with Stoke.

His 15 goals fired the Potters into the Premier League in 2007-08, ending a 23-year absence from the top flight, and he then helped Tony Pulis's side establish themselves in the top division.

Fuller left the Britannia Stadium in 2012 and who were in their first season back in the second tier, and netted five goals in 31 appearances.

Blackpool travel to Middlesbrough on Saturday, although Fuller is unlikely to be involved.

"I'm looking forward to playing as soon as I'm fit enough, or as soon as the manager sees me as ready enough to do my part," he added.