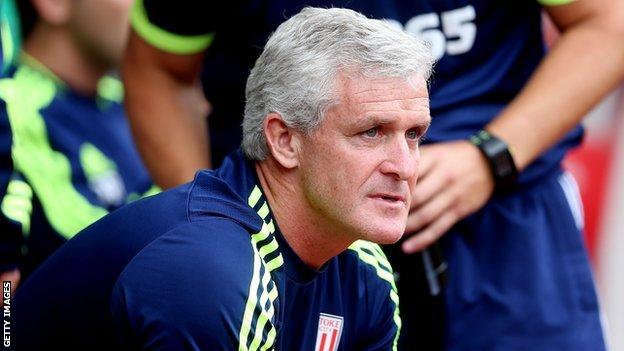 Stoke City boss Mark Hughes has the toughest job of his career, according to former Potters boss Lou Macari.

"If Mark can keep Stoke out of trouble then that will be the equal of David Moyes retaining the title for Manchester United in his first season," Macari told BBC Sport.

Hughes, 49, took charge of Stoke in the summer after Pulis left the club by mutual consent in May.

The Potters are set to begin their sixth consecutive season in the top flight, after Pulis guided them to promotion from the Championship in 2007-08.

Since then, Stoke have finished in the top 14 of the Premier League in each of the last five campaigns and reached the 2011 FA Cup final, an achievement that led to them playing in the Europa League.

"Tony did a great job and I thought he was treated very badly by Stoke," added Macari.

"He is responsible for them being in the Premier League for six seasons, had taken them to Wembley and got them into Europe.

"They should have pinned a medal on Tony, not sack him. This is the most difficult job Mark has had in football."

Pulis first took over Stoke in November 2002 when they were near the bottom of the second tier, but guided them to survival with a win against Reading on the last day of the season.

He was sacked in June 2005 by the Icelandic owners after disagreements about transfer policy, only to return a year later for a second spell following Peter Coates's takeover of the club.

They should have pinned a medal on Tony, not sack him

Stoke achieved promotion to the Premier League in Pulis's second season back, to end a 23-year wait for top-flight football.

He has only been able to bring in defenders Erik Pieters from PSV Eindhoven and Marc Muniesa from Barcelona during the summer to bolster his Stoke squad for the new season.

The Welshman also has to address the Potters' direct approach under Pulis. Arsenal boss Arsene Wenger likened it to rugby and many Stoke fans appeared to grow weary of it.

"What makes it even more difficult for Mark is that he has to be successful playing attractive football," said Macari, who managed the Potters for 266 games in two spells in charge, from 1991 to 1993 and then from 1994 to 1997.

"It was the direct style that was the main problem for many Stoke fans. Like all Stoke fans, I want Mark to be a success, but he's got his work cut out."