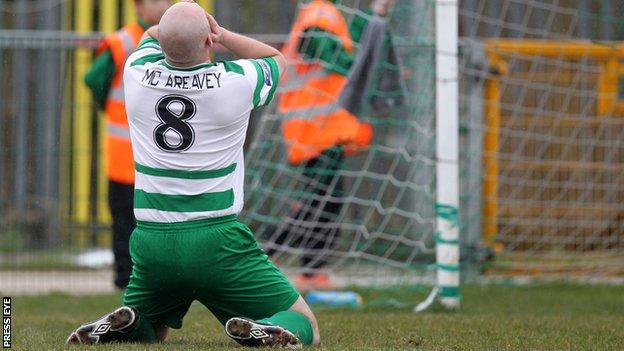 Donegal Celtic will not be allowed to participate in the Irish Cup this season after what the club have described as "an oversight".

It is the latest administrative error by the crisis-hit west Belfast club, who were relegated last season.

The club are also ineligible to play in the Steel and Sons Cup this season due to an administrative blunder.

It is a blow to new boss Paul McAreavey and the club, who contested an Irish Cup semi-final as recently as 2008.

The club have faced a number of difficulties in recent months.

In March they were docked three Premiership points for fielding the suspended Sean Cleary in a league match.

Former manager Pat McAllister resigned two weeks ago, along with a number of players, in the wake of their play-off defeat to Warrenpoint Town at the end of last season.

McAreavey guided the Championship One side to a 1-1 draw with Ballyclare Comrades on Saturday.

The club reached the Irish Cup quarter-finals in 2011 and lost in the semi-finals to Coleraine, after a replay, five years ago.