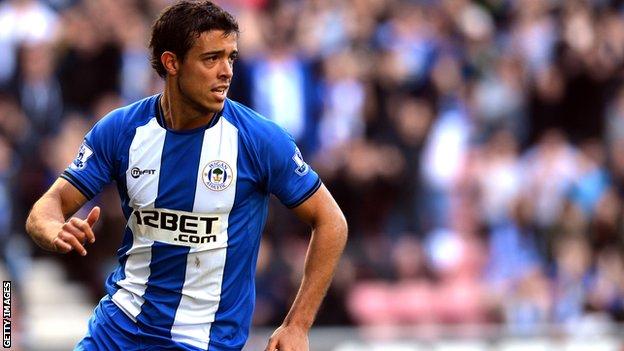 Di Santo, 24, was a free agent after his contract at the DW Stadium expired at the end of June.

The Argentina international joined Wigan from Chelsea in 2010 and scored 13 times in 92 league appearances.

"Werder have a very good name and the Bundesliga is a very attractive league," he said. "I want to show what I am capable of here."

Bremen general manager Thomas Eichin told the club website: "We had been in the hunt for a robust striker with experience in a big league.

"We are very confident that we have found a good solution in Franco Di Santo.

"He is experienced but still possesses enough potential for development in order to make a great leap forwards."

Di Santo played for Chilean side Audax Italiano before joining Chelsea in 2008. He was loaned to Blackburn for the 2009-10 season, scoring once in 22 Premier League appearances.

Roberto Martinez paid £2m to take him to Wigan in August 2010. The striker left the club following their relegation at the end of last season.