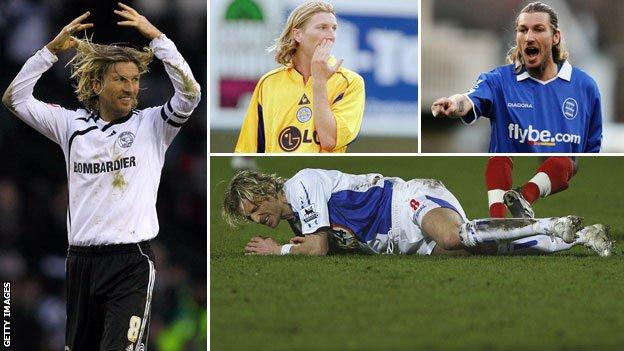 Robbie Savage is one of British football's most controversial and colourful characters.

Now a successful football pundit, he enjoyed 17 seasons as a professional footballer, beginning his career at Manchester United and ending it at Derby County.

Here is his 11-point guide to the dirty tricks footballers will use to get the transfer they want:

Sulking is horrible and can have a really negative impact on your team-mates and the club as a whole. When you sulk, your whole demeanour changes and you bring people down with you.

I came across it all the time when I was a player and at times I could be one of the worst offenders because I couldn't hide my emotions. When I was unhappy, it was obvious. My mood would change completely.

Clamming up and staying silent is a very effective tool. It was a tactic I adopted on occasion. Normally, I am a fun, happy-go-lucky guy, so if I stopped communicating, people knew straight away that something was up. I just wouldn't speak to anybody.

I'd train as normal but would leave as soon as it was over. I wouldn't stay for lunch and eat with my team-mates, I would simply disappear off home.

Feigning injury is probably the most popular way of letting a club know you aren't happy. I've seen quite a few mystery injuries in my time. Some players could be sidelined with a twisted sock if they wanted to. It used to be so easy to fake an injury, but that has changed now.

If you get an injury, you are usually seen by a physiotherapist and have a scan within an hour. You can't kid people as easily, but you can still fake a niggle - and they can last for ages. When you feign an injury, there is no need to limp or play act. Just say you're not right.

Some players have friends in the media and make use of those contacts to get the move they want. I've called newspaper reporters I was close to and asked them to link me with this team or that team, even when I knew it wasn't true.

It helped get my name out there and flush out possible interest. It's harder to do that nowadays because the media often know what's true or not, but I called people I knew a few times and got them to make up a story.

You have to be realistic, of course. There was no point linking myself with Real Madrid because everybody would know that would be a lie!

From Birmingham to Blackburn

You can go one step further with the media and enlist the help of the television companies. When I wanted to put pressure on one manager, I arranged for a camera crew to meet me at the training ground when I knew everyone was enjoying a day off.

I wanted to give the impression I was being forced to train on my own. That night, the TV report went out and I thought I had accomplished my mission. Unfortunately for me, the manager saw straight through my gimmick. It was then that I knew I had made myself look a fool.

You can listen to Savage explain on 606 how he tried to engineer a move from Birmingham to Blackburn using the above tactic on BBC iPlayer (topic starts at 35:55).

How do you do that? One way is to go straight to the chairman or owner of the club when you want to discuss your future. It was something I did. On one occasion, I was out of favour, so I went to the chairman and told him I wanted to leave.

I had two years left on my contract and told him I would settle for one year's pay if he would let me go. The news got back to the manager, who was waiting for me in reception the following morning. He wasn't happy.

At another club, I phoned the chairman at home. It was forbidden to do that, but I felt I had no other choice. The chairman was very understanding, but the manager called me into his office the next day and told me I was out of order.

It's an extreme measure but does happen. At one club, the players knew I wanted to leave but some started to get a little upset at my antics. There was some unrest in the changing room.

One day, I had a big argument with the goalkeeper. He came over to me, had a right go and grabbed me by the throat. I got up, we scuffled and he ended up with a cut lip after my head came into contact with his face.

Savage was released by Manchester United as a youngster and joined Crewe but every other permanent move in his career was for a transfer fee - to Leicester, Birmingham, Blackburn and Derby

Physiotherapists, coaching staff, canteen workers and secretaries are all capable of reporting back to the manager, so if you want to create a stir, have a moan when these people are in ear shot. It won't be long before the manager finds out how you're feeling.

At one club, I was sitting in the physio room and let it drop that I wanted to join another club. I added that I was so confident of a deal happening that I insisted I would be playing for that club the following week.

Lo and behold, the manager called me in the following day and asked me to explain myself.

Be a bad influence

Any player can cause havoc in the changing room or out on the training pitch. You just need a bad attitude. It doesn't matter what it is, do it badly and you soon get a reputation the manager cannot ignore. If he doesn't, then the risk is you start affecting everyone around you.

Don't put the effort in

It can be hard to do, but one sure way of losing the manager's backing is by not giving 100% in a match. I say it's hard to do because you're not just letting yourself down, you are letting your team-mates, fans and family down.

I only did it once and I'm not proud of my actions, but it felt like it was the only avenue left open to me. That was the point at which the manager knew he had lost me and there was nothing he could do to keep me.

Let other clubs know you want to move

Tapping up is illegal but it goes on. Players do it and managers do it. I had two managers call me at home while I was still under contract at a club. And I've tried to engineer a move myself by speaking to players at clubs I was interested in joining.

A discreet chat with a player from another club - maybe while we were both on international duty - was an obvious way of letting another club know I was interested in signing for them.