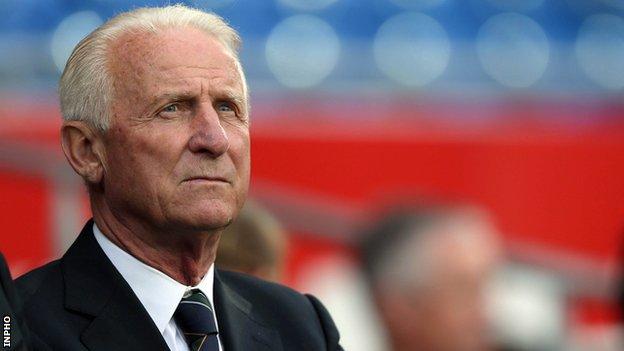 Republic of Ireland manager Giovanni Trapattoni was pleased with his team's display even though they missed a series of chances in the goalless friendly draw against Wales in Cardiff.

"We deserved to win. We had three or four clear chances. The goalkeeper was fantastic," said the Republic manager.

"It was a friendly game and pre-season but at this moment, I am happy."

The 74-year-old Italian added: "I was worried that after the holiday maybe the team would not have the right mentality and I said to the players to remember what we did before. The performance was good enough."

The game at Cardiff City Stadium was the Republic's final contest before next month's vital back-to-back World Cup qualifiers against Sweden and Austria and Trapattoni's team looked a composed unit for most of the 90 minutes.

John O'Shea, who skippered the Republic on his 90th cap in Robbie Keane's absence, acknowledged "a little bit of disappointment" at the number of missed chances, with Shane Long squandering the best opportunity when he blazed over in the first half.

"We had a couple of really good chances to win the game. On another night we might have got a nice away win," added the 32-year-old Sunderland defender.

"But it wasn't to be and we took the positives which include Paddy Madden's debut.