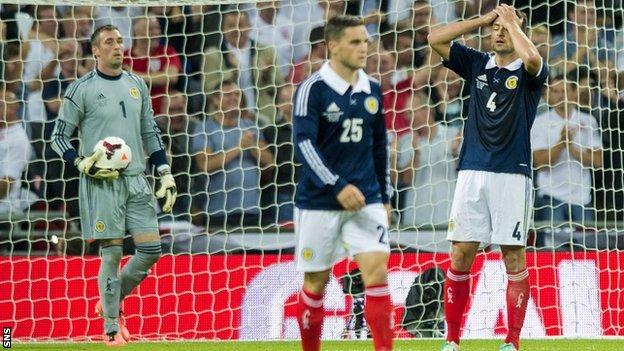 Scotland defender Russell Martin insists there are positives to be taken from but rued the loss of "soft goals".

The Scots led twice at Wembley but England fought back to win 3-2, with Rickie Lambert heading the winner.

"The feeling in the dressing-room is one of deflation really," said Martin.

"We have been in a great position twice in the game, which maybe a lot of people did not expect us to be in, and we've given away three soft goals."

We should be upbeat, definitely. People wrote us off long before tonight and we put in a very decent performance

"The first one obviously where Grant [Hanley] is off the pitch then the two set-pieces are really disappointing," Martin said.

"There are lots of positives in the long run. But, at this point in time, it's hard to see them.

"When you are 2-1 up against England at Wembley, you at least try to get a draw and, as the manager said, and, as players, to be involved in that does not come along all that often.

"We have missed a chance, but you take the positives. It's a steep learning curve.

"When you see the players they are bringing on from the bench, there is a vast difference in strength in depth to what we've got at this time.

"But the last two games hopefully people can see we're going in the right direction and we're trying to play the right way."

And though Scotland cannot reach next year's finals in Brazil, Martin is confident the national team is "going in the right direction".

"We should be upbeat, definitely," added the Norwich City player.

"I think people wrote us off long before tonight and the last game we played [the 1-0 win against Croatia] as well and we put in, in patches, a very decent performance.

"They have not really cut us open too much until the game's got a little bit stretched.

"We're all feeling really hurt at the minute, but hopefully in the long run there'll be plenty of positives to take from that."