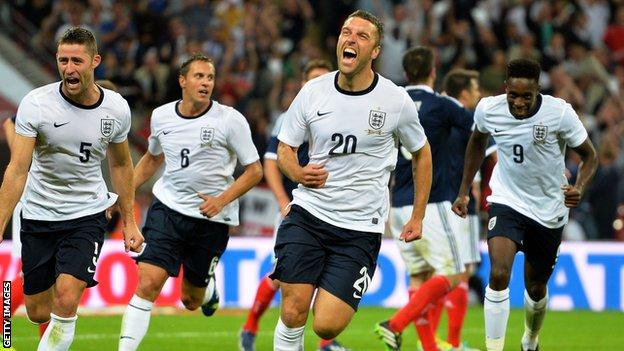 Rickie Lambert said it was a "dream come true" after scoring England's winning goal against Scotland with his first touch in international football.

The Southampton striker, 31, sealed a 3-2 friendly victory at Wembley for Roy Hodgson's men with a powerful header.

"If that's the only moment I'm going to have in an England shirt - hopefully not - I couldn't have wished for it to have been any better," he said

"I'm thankful for it to have gone like that."

Ten years ago this week, Rickie Lambert was playing for Stockport as they lost 2-1 at home to Luton in what is now League One

Lambert only played in the Premier League for the first time last season after a career spent in the lower leagues. But he scored 15 goals and ended as the joint leading English goalscorer, with Chelsea midfielder Frank Lampard, in the top flight.

"I've dreamt for it to go like that for a long time and for it to have gone like that was a dream come true," he said.

"It's probably the best header I've headed in my life."

"I saved it for the right time. It was a terrific ball by Leighton Baines, I managed to lose my marker and he put it exactly where I wanted it.

"I've tried to enjoy it, but my focus was to try and do well."

England twice came from behind at Wembley to beat Scotland, as the sides met for the first time in 14 years.

The match came ahead of England's crucial World Cup 2014 qualifiers against Ukraine and Moldova next month.

England currently sit second in Group H, two points behind leaders Montenegro and a point in front of Ukraine - who they travel to on 10 September.

Only the group winners are guaranteed to make it to Brazil, with the eight runners-up with the best record against the teams finishing first, third, fourth and fifth in their section going into the play-offs.

Ahead of the vital competitive fixtures, manager Hodgson was glad his side did not have a "stroll in the park" on Wednesday.

"We have done very well to win the game," the 66-year-old said. "We came from behind twice, going behind against the run of play twice.

"We had to pull out all the stops to get back. I thought we dominated the game. It was a victory which was very hard fought.

"We didn't want a stroll in the park before the games in the autumn. We want to know we can come from behind and create enough chances."

Scotland took the lead when James Morrison's long-range effort was fumbled into his own goal by Joe Hart but Theo Walcott equalised after being put through by an excellent Tom Cleverley pass, while Danny Welbeck rose to head in a free-kick shortly after Kenny Miller's sharp turn and finish had given the visitors an early second-half lead.

And within three minutes of coming on, Lambert headed England in front from a Baines corner.

In a lively cameo following his surprise first call-up, the former Stockport and Rochdale player also saw an effort rebound off the post and a tame shot collected by Scotland goalkeeper Allan McGregor.

"He's been so enthusiastic," Hodgson said. "He's been like a young boy with a new toy ever since he joined us.

"We believe in him and, funnily enough, when he came on the first thing [England coach] Gary Neville said to me was 'he's going to get us a goal'.

"He almost got us three - he certainly got us a very good one and was very close to two others.

"I'm delighted for him. He's a man who's worked very, very hard for this chance and done it the hard way, and now he's crowned his debut with a goal.

"He's technically a very good player and has great composure in front of goal, as we saw."

England are next in action when they host Group H also-rans Moldova on 6 September, before playing Ukraine in the first of three critical qualifying games.

They finish their campaign with matches against Montenegro on 11 October and Poland on 15 October.

570 comments
Back to top
unknown