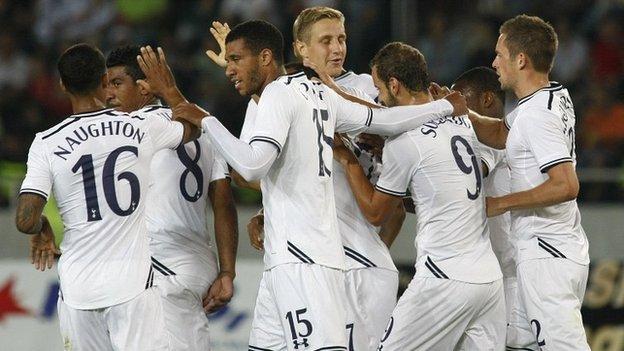 Roberto Soldado continued his fine start at Tottenham by scoring twice as his side outclassed a poor Dinamo Tbilisi to take control of their Europa League qualifying play-off tie.

Andros Townsend served a reminder of his value by scoring on the counter attack after 12 minutes before crossing for Paulinho and Soldado finishes.

But Danny Rose's strike and a Soldado tap-in look to have settled the tie.

Spurs could have made it six when substitute Harry Kane hit the bar late on following Nacer Chadli's lofted cross but once Andre Villas-Boas's side established their superiority at the end of the first half, they had few worries.

Striker Soldado, who joined Tottenham from Valencia for a record £26m fee and scored 24 goals in 35 games last season, picked up where he left off by netting on his debut in a 1-0 Premier League win at Crystal Palace on Sunday.

And with Gareth Bale set to join Real Madrid, the emphatic scoreline in Georgia showed that Villas-Boas' side have a depth that they perhaps lacked last season when the Welsh winger was a talismanic presence.

In addition to Soldado, Spurs have also recruited Etienne Capoue, who impressed on his full debut, while other summer signings Chadli and Paulinho were effective.

Tottenham will face far sterner tests this season, but the performance of Townsend will also offer his manager encouragement.

Townsend, who is a Spurs Academy graduate, has only made a handful of appearances since signing professional forms in 2008 and has been on loan at nine different clubs.

But with Bale close to leaving and Aaron Lennon injured, the 22-year-old made the most of his opportunity on a rare European start.

The visitors survived a scare before they went ahead, when Younes Kaboul deflected Elguja Grigalashvili's shot after a decent run, and when the opener came it was moments after a Dinamo corner.

Gylfi Sigurdsson cleared the set piece, but with men drawn forward, Townsend latched onto the loose ball in his own half, raced forward and cut inside a defender to fire in from 22 yards.

It was a classy strike, and settled any Spurs nerves as Villas-Boas attempts to repeat the Europa League title win he achieved while in charge of Porto in 2011.

Georgia's champions Dinamo, who dropped into the Europa League after losing a Champions League third qualifying round tie to Steaua Bucharest, were denied when Lloris had to make a fine stop following Dvali's stooped header before the half-hour mark.

Just before half-time, the hosts lost their top scorer from last season, Xisco, to injury and were blunt in attack afterwards.

And two minutes before the break, Townsend found space down the right, turned to put a Dinamo defender on his backside and then chipped in to the unmarked Paulinho, who headed in.

Tottenham looked comfortable from the start of the second half and put the game beyond reach after 58 minutes when Townsend dribbled to the byline and cut the ball back to Soldado for an easy finish.

Rose fired superbly into the top corner after good work by substitute Chadli just before the hour mark, and then Soldado grabbed his third goal in two games when he tucked in at the back post following Chadli's fizzing cross.

There were isolated chances for Dinamo's Giorgi Merebashvili and Grigalashvili but Lloris was determined to keep a clean sheet with two fine stops.

Tottenham boss Andre Villas-Boas on Andros Townsend's display: "Andros has been working well in training, so we felt it was time to give him an opportunity and he did very well.

"If we have the type of performance we had [from him today] we can always count on him.

"For all the young players we are bringing through, the competition they face is extremely difficult and in my opinion, when you overcome that type of opposition you can only become a top player.

"He is doing it the right way. He seems very focused after last year's experience."