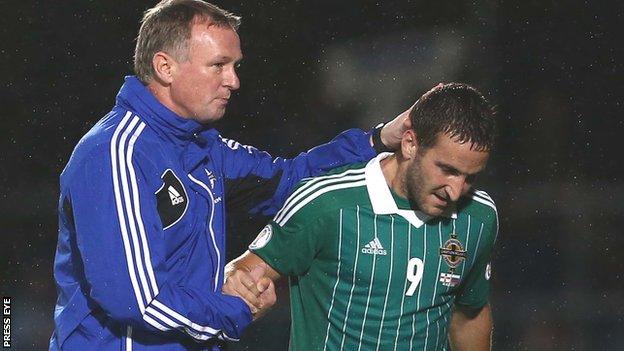 Kings of Leon were playing their set just streets away but for Northern Ireland fans there is no sweeter sound than a rocking Kop on one of Windsor Park's glory nights.

It was exhilarating stuff, locked inside a chamber of noise as the Green and White Army roared its men to a first win in two years.

It was also a reward for patience, with manager Michael O'Neill chalking up his maiden victory at the 10th attempt.

Even better, this was not winning ugly - there was a hint of panache, particularly in the first half, with the passing crisp and confident.

At the back Gareth McAuley was in thou-shalt-not-pass mode, while lone striker Martin Paterson added a precious goal to his trademark industry.

Fans should be wary about getting carried away, for it is seems part of Northern Ireland's DNA to take the scalp of one of Europe's elite while in the same campaign failing to beat the likes of Luxembourg at home.

So Northern Ireland should enjoy the moment and get excited about the upcoming Portugal game, but maintain patience as international progress will be a long-term project both on and off the field.

Sitting in the South Stand, my view was impeded by a pillar holding up this rickety, wooden museum piece.

Not great when the area blocked out is the centre of the Russian goal, so I saw just a snippet of Paterson's winning header.

The bulldozers will soon put the old stand out of its misery and work will start of a major upgrade of Windsor Park, transforming it into a modern 18,000 seater stadium.

O'Neill's task is to build a team fit to grace the new national stadium and ensure all those seats are filled for every game.

In a canny move, he has brought former Northern Ireland team-mates in to the youth set-up.

Northern Ireland have Stephen Craigan in charge of the U19s, Kevin Horlock was appointed as assistant to U21 boss Stephen Robinson earlier this week and Jim Magilton is elite performance director.

Men cut from the same cloth as O'Neill, they are role models who will instil in young players a sense of pride in representing Northern Ireland.

Their wise words may just keep a few more in the fold instead of switching allegiance to the Republic or deciding to concentrate on club football.

Much depends on Magilton, who outlined his targets in the match programme for the Russia game.

"We specifically need to raise the standards at elite level and young international level at all age groups," he wrote.

"We have to deliver a structure and platform for players to go out and play football and express themselves."

Northern Ireland have always been more graft than craft and Magilton must challenge a footballing culture which still favours power over guile.

The first half against Russia - fluent in possession and backed up by resolute defending, should be the template.

It may take a few years to see the benefits at senior level but it could be worth the wait.