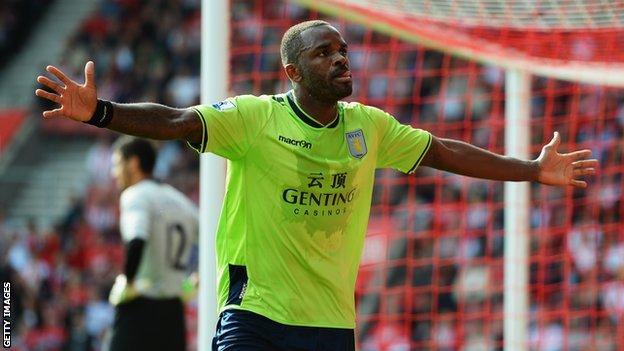 Darren Bent has signed for Fulham on a season-long loan from Aston Villa.

The striker, a club record £18m signing in 2011, was sidelined at Villa for much of last season following a hamstring injury and the emergence of Belgian forward Christian Benteke.

Fulham boss Martin Jol said: "He gives us pace up front and I am confident that he will add to our goals scored tally this season."

It is the second time Jol has signed Bent after buying him for Spurs in a £16.5m deal from Charlton in 2007.

The Dutchman added: "He has shown in the Premier League that he is composed and clinical in front of goal but, even if he is not scoring, he is involved in some good link-up play, creating opportunities for his team-mates."

It is not clear whether the deal includes an option to buy at the end of the season.

Other notable arrivals include forward Adel Taarabt on loan from Queens Park Rangers and goalkeeper Maarten Stekelenburg from Roma for an undisclosed fee.

Both Newcastle boss Alan Pardew and Crystal Palace manager Ian Holloway believed Bent was close to signing for their respective clubs before he opted for Fulham.

"I think he was close in terms of the deal but Darren has decided his future lies elsewhere and we wish him all the best," said Pardew on Friday.

Bent has made 13 appearances for England, scoring four goals, but has not played for his country since before Euro 2012.