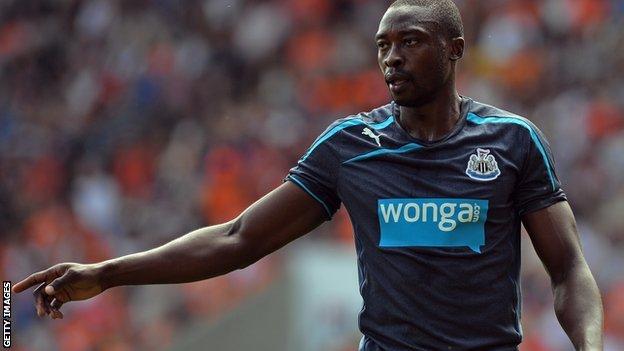 Newcastle striker Shola Ameobi wants a season of regular first-team football to give him the best chance of playing for Nigeria at the World Cup.

Despite earning 20 England Under-21 caps, a change to Fifa rules means the Zaria-born forward is eligible for selection by manager Stephen Keshi.

The 31-year-old, who has one cap for the Super Eagles, made just four league starts last season.

"It's top of the agenda," Ameobi told BBC Newcastle.

"A lot of years I couldn't play (for Nigeria) but Fifa changed the rules and I now have an opportunity to do what every footballer wants to do, which is to play in a World Cup.

Ameobi made his Premier League debut for Newcastle against Chelsea in September 2000 (pictured). He has made 270 appearances in all competitions and has scored 76 goals.

"I have been called up for friendlies and hopefully I can show the manager what I can do, but you need to play games to get into the squads."

Ameobi is eligible for Nigeria as he holds dual-nationality and has not played for England at senior level.

Other players to have made a change include Hearts winger Andrew Driver, who played for England Under-21s before switching to Scotland, and Ameobi's international team-mate Sone Aluko who has England Under-19 honours.

Aside from a six-game loan spell at Stoke City in 2007-08, Ameobi has spent his entire career at St James' Park since joining the club's academy in 1995.

The Magpies recently bolstered their forward options with the arrival of QPR's Loic Remy on a season-long loan deal and Ameobi conceded that he would be willing to look elsewhere for first-team football if necessary.

"There's been a lot of speculation regards people coming in and out, but I'm an old head now and I just have to focus on myself and making sure I am right, whether it's playing for Newcastle or someone else," he said.

"Of course I am happy here - I wouldn't be here if I wasn't - but if a lot of strikers do come in then I am pushed down the pecking order, I need to make sure I get games.

"It's important I look at that and see where we are."