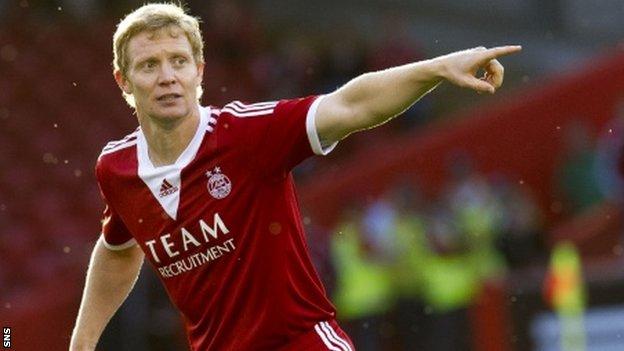 Aberdeen midfielder Barry Robson has had surgery on a knee injury.

Manager Derek McInnes told BBC Scotland that he hopes the exploratory operation will not reveal anything "too sinister".

But 34-year-old Robson, , is likely to be out for several weeks.

I hope this is the start of something special and I believe we can be successful, but how quickly that happens remains to be seen

"Barry Robson is out," said McInnes. "He is down south today having surgery to explore what the problem is with his injury.

"We don't think it is anything too serious, but it will be enough to keep him out for a few weeks."

Robson, who departed Celtic for Middlesbrough, made his Dons debut in a , being replaced with Peter Pawlett after 82 minutes.

He subsequently missed last weekend's , a result that has Aberdeen sitting second in the Scottish Premiership table behind Caley Thistle on goal difference.

Meanwhile, McInnes was eager to play down the match against Celtic amid the hype following that good Dons start.

"Like everyone else, the players and myself are looking forward to the game," he told Aberdeen's website. "It is a fantastic game to be involved in.

"Obviously there is a lot of excitement about it and that is the way you want it to be.

"For us, though, it is just about being professional and going out and doing a job.

"The excitement is for everyone else. I am so grateful to the supporters for the way they have responded and bought so many tickets and believed in what we are trying to do here.

"All the hype is for the fans and the media. You would rather people were talking up the game than being negative about it.

"I hope this is the start of something special and I believe we can be successful, but how quickly that happens remains to be seen."