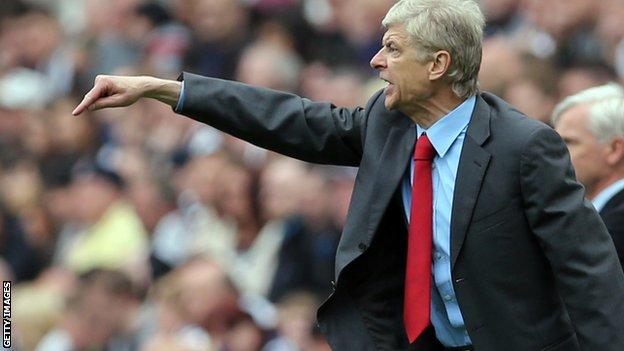 Arsenal boss Arsene Wenger has insisted he will work on signing new players right up until transfer deadline day.

However, the Gunners manager admits he is unsure how many players he can bring in before 2 September.

Auxerre forward Yaya Sanogo, 20, is the only new face so far as Arsenal failed in a bid of over £40m for Luis Suarez.

"I cannot certify what the number of players coming in will be, but we will be active until the end, that is for sure," said Wenger.

"We are a bit light at the moment, but there are 18 days to go until the transfer window closes. We are still looking to strengthen our squad.

"It's difficult to find quality players to strengthen the team and squad because there is a shortage of top players who are available.

"We are not scared to spend money but we won't compromise on the quality of the players."

The Arsenal manager has moved fringe players on in this window with Marouane Chamakh,Gervinho,Andrey Arshavin,Denilson and Andre Santos leaving the Emirates Stadium.

However, supporters have grown concerned by the lack of big-money signings ahead of their Premier League opener against Aston Villa on Saturday despite chief executive Ivan Gazidis claiming there was plenty of financial power at the club.

Wenger has been left frustrated so far in his pursuit of Liverpool striker Suarez, 26, as the Reds continue to stand by their stance that the Uruguayan is not for sale.

Napoli beat them to the signature of Gonzalo Higuain, 25, despite the Gunners showing interest in the former Real Madrid striker.

"We are in a situation like Manchester United, like Chelsea, where everybody expects signings and at the moment not a lot has happened," Wenger added.