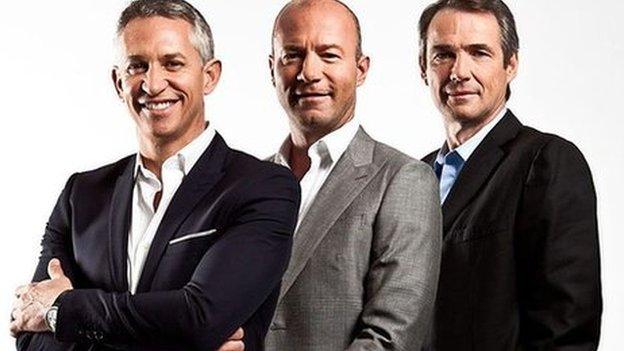 So, just one more sleep and the wait is over. The Premier League is back and so too is Match of the Day for the start of its 50th year.

And if you think the summer transfers sagas of Gareth Bale, Wayne Rooney and Luis Suarez have been controversial just wait for the reaction when I tweet the order of games tomorrow night. Yes two teams will be on last but don't take it personally, it happened to every club at some point last season, apart from the champions.

You might have noticed a few changes in the broadcasting landscape this summer but there's still something special about Match of the Day. Remember, we have the best of the action from every game, every week.

Five-and-a-half million of you tune in every week, with quite a few still doing their best to avoid the results. Not so easy in the age of social media, the Likely Lads had it easy.

It's fair to say the 2012-13 season wasn't a vintage year of Premier League action but over the last few Saturdays I've got the buzz back. Leicester's unbeaten start in the Championship has helped but who could fail to be excited by a season that promises so much?

We'll miss Sir Alex Ferguson but his departure has given us some new storylines and a line-up of M's that Bond would be proud of... Mourinho, Moyes, Martinez, Malky Mackay, Mark Hughes and Manuel at Manchester City - all have much to prove and don't forget Ian Holloway's Saturday night sound bites too.

And there's some new faces lined up for the Match of the Day studio as well, alongside our proven performers Alan Hansen and Alan Shearer. Danny Murphy, Gus Poyet, Robbie Fowler, Michael Owen, Gianluca Vialli, Robbie Savage and Peter Schmeichel will bring their Premier League experience and insight to Saturday nights.

There'll be enhanced analysis, a social media voting system and probably the best news of all, that Match of the Day is now on iplayer from midnight Monday.

Motd2 returns with the happy one, Jose Mourinho, not new presenter Mark Chapman. 2-Good-2-Bad is back and there's a new show, the imaginatively titled Motd2 Extra, every Sunday at 12.20pm on BBC1 and 5 live from mid-September.

Robbie Savage has nailed down his old team-mate, and mine, Mark Hughes for the first Football Focus. Watch out for the new kick-off time of 12:00 BST with Dan Walker and Mark Lawrenson. There's also a new look Final Score, with pre-match player and manager interviews ahead of the 15:00 games.

The weekend football is covered from every angle but forgive me if I'm biased…the world will only seem right again when I hear THAT theme tune…22:30 on BBC1. And don't forget, it's the editor that picks the running order, not me.