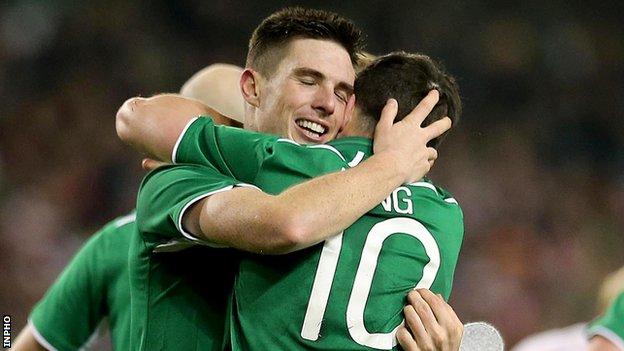 "It is possible we will go in with the same back five," said Trapattoni.

"Ciaran Clark is a strong defender and he has a good mentality."

Millwall keeper Forde has established himself as the Republic's number one goalkeeper over the last 12 months but he missed the Cardiff friendly after undergoing knee surgery.

St Ledger is also a major doubt for the back-to-back qualifiers against the Swedes and Austria on 6 and 10 September because of a knee injury.

"We have injuries to David Forde, Richard Dunne and Sean St Ledger. We could even have another problem by them, it is sometimes like that," added the Republic boss.

Westwood is hoping for more first-team action at Sunderland this season after losing his regular place in last year's campaign.

But he will almost certainly start against the Swedes if Forde remains on the sidelines.

Zlatan Ibrahimovic scored a hat-trick in Sweden's 4-2 friendly win over Norway on Wednesday night as the Republic were being held goalless by Wales.

However, the Republic defence were able to counter the Paris St-Germain striker during last March's 0-0 qualifier draw in Sweden and Trapattoni appears optimistic that the star forward can be subdued again in Dublin.

"Obviously there is a lot of quality in individual players and Ibrahimovic can score in any situation at any moment, but we have a good attitude and mentality at the moment and we are confident," he said.