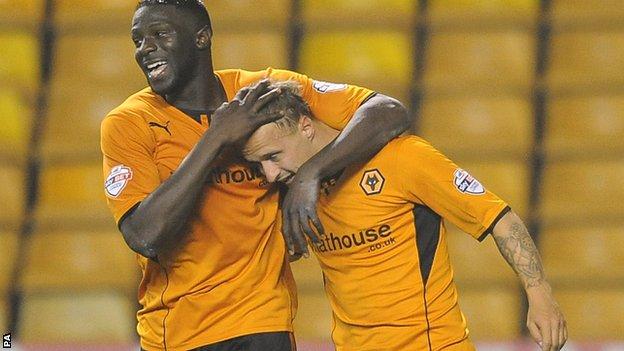 But Clarke drilled home from inside the area to level the scores before Kyle McFadzean was adjudged to have blocked Kevin McDonald's cross with his arm.

Griffiths lashed into the bottom corner to send Wolves top of League One.

"I'm disappointed because we should have seen it through. We were on top for quite a while and played some really good stuff.

"Obviously we've come away with no points but hopefully we've shown the nation that we can play and do things the right way.

"I've seen the penalty incident and it may have struck his arm. We've had a lot of meetings with the League Managers' Association and the referees over the last few weeks where they talked about how if nobody is making an attempt to make themselves bigger, which Kyle [McFadzean] isn't, it's tough to see unless you really slow it down.

"I spoke to the players at half-time and I did believe that they paid them [Wolves] too much respect at the start of the game.

"I was a bit worried after 10 minutes but we improved and looked a little bit more secure [than in previous games] and because of the way we play there are always going to be opportunities."