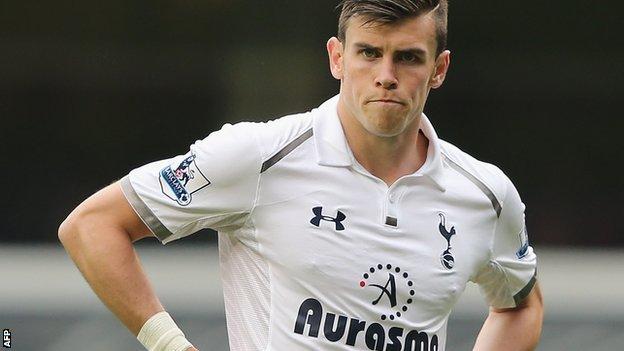 Gareth Bale has been ruled out of action for two weeks, Tottenham boss Andre Villas-Boas has said.

Forward Bale, 24, who has been linked with a move to Real Madrid, will miss Sunday's Premier League game against Crystal Palace with a foot injury.

Spurs play Dinamo Tbilisi in the Europa League on Thursday and Swansea in the league three days later.

"For Palace, for Tbilisi, for Swansea, he will not be in line to threaten to come back," said Villas-Boas.

Should Bale return in two weeks' time, he will be available for Spurs' away game against Arsenal at the Emirates on 1 September, one day before the transfer window shuts.

There has been speculation that Real Madrid could complete a world-record transfer of more than £80m for the Welshman, who has scored 42 goals for Tottenham.

Real's manager Carlo Ancelotti said the clubs were in talks,which angered Villas-Boas, but no deal has been agreed and Bale is yet to publically announce his intentions.

He played the first half of Tottenham's pre-season friendly against Swindon on 16 July but not played since.

Bale linked up with his Wales team-mates but did not feature in their 0-0 draw with Republic of Ireland on Wednesday.