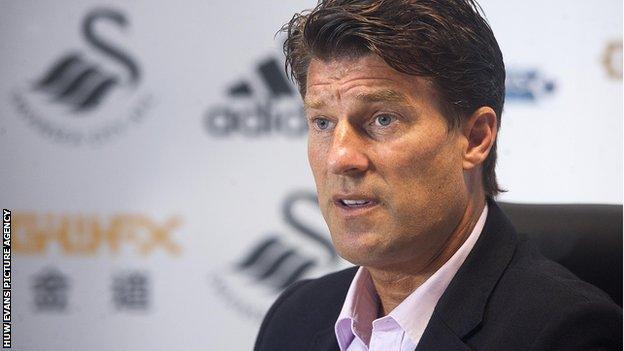 The Swans face the Premier League champions under new manager David Moyes in the opening game of the season at the Liberty Stadium on Saturday.

United have had an indifferent pre-season while Swansea have already beaten Malmo in the Europa League.

But Laudrup said: "It's never the right moment to play Man United because there is always quality."

And he added: "I could sit here and say it's the best moment you can play Man United or top team like that and we lose 3-0 on Saturday.

"But [having] said that we know we have to play them, so I think in the beginning is not a bad moment."

Since taking over from Sir Alex Ferguson, Moyes has had to deal with speculation about the future of striker Wayne Rooney and there are doubts about the fitness of key players such as Michael Carrick and Ashley Young.

But Laudrup knows whoever Moyes picks on Saturday, Swansea City will have a difficult challenge despite an encouraging pre-season which saw them beat Malmo 4-0 on aggregate in their opening Europa League match.

"I don't want to go into that [the Wayne Rooney debate] because it's not my problem," added Laudrup.

"Whatever they do they will still be a very, very strong squad.

Laudrup says he wants to sign another striker before the transfer window closes on 2 September, 2013.

The Swans broke their club transfer record when they signed Ivory Coast striker Wilfried Bony for £12m in July.

And Laudrup believes they need another option up front especially with their Europa League commitments.

"I think we want one more alternative, a different kind of forward.

"If suddenly one of our players is going to leave then we have to find a replacement.

"I hope the regulars here will stay. I think we have created a very good, competitive squad.

"We signed Bony. That was great to take a little of the pressure off the shoulders of Michu.

"But still we need another different kind of striker because hopefully we will play many, many games.

"That depends on what we are doing in the two games against the Romanian side at the end of the August.

"But if we go into the group stage it could be 30 games before [the] New Year."