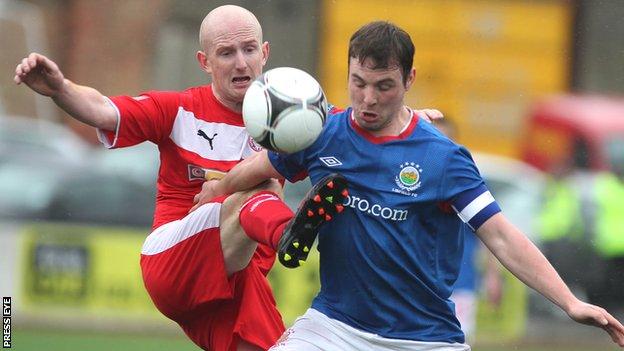 Linfield boss David Jeffrey is bullish ahead of the Premiership clash against champions Cliftonville.

The Windsor Park showdown is between the two teams expected to battle it out for the 2013/2014 league title.

It is the second of four tough opening matches for the Blues but Jeffrey is enjoying the challenge.

"We are relishing it - we are taking on the champions and if you don't have the appetite for games like this you shouldn't be in it," said Jeffrey.

He added: "For us it is a great challenge, bring it on."

The Blues started the campaign with a 1-1 draw at Portadown while Cliftonville defeated newly promoted Ards 4-2.

"Linfield are always going to be there and they are smarting from last season," said Reds manager Tommy Breslin, who is without injured skipper George McMullan.

"It's coming a bit early in the season for both of us but we'll go there and give it a good go."

Portadown welcome Sean Mackle back from a hamstring injury as they prepare to take on Coleraine at the Showgrounds.

Glentoran pair Richard Clarke and Mark Miskimmin are suspended for the visit to Glentoran while Jay Magee, Jason Hill and John McGuigan are out injured.

Dungannon Swifts have a Stangmore Park encounter against a Ballinamallard side missing banned striker Andy Crawford.

Crusaders defender Colin Coates was red carded along with Crawford at Ferney Park last weekend and he is suspended for the meeting with Ballymena at the Showgrounds.

"Ballymena are one of the emerging teams in the league and they have quality players in their squad," said Crues boss Stephen Baxter.

"They gave us trouble in the league last season and I will definitely not be underestimating them on Saturday."