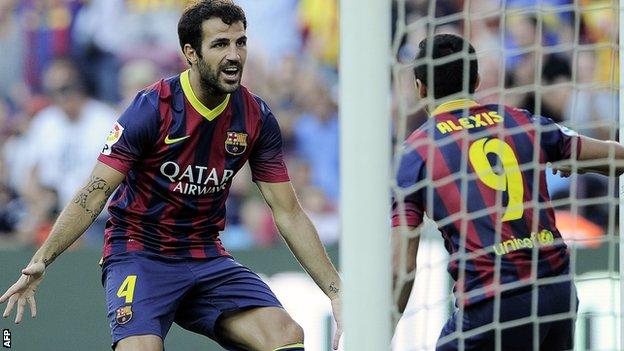 Barcelona and Real Madrid each began the new Spanish season with home wins on the opening weekend of La Liga.

Lionel Messi and Pedro each scored twice, with Alexis Sanchez, Dani Alves and Xavi adding others as Neymar made his debut as a substitute.

Rivals Madrid had to work hard before edging out Real Betis in a 2-1 win.

Last season's runners-up also had a new man in the dugout as ex-AC Milan, Chelsea and Paris St-Germain boss Carlo Ancelotti made his La Liga bow.

But it was far from a smooth evening for the Italian as Los Blancos needed a late winner from debutant Isco to seal victory against plucky visitors Betis.

Instead it is arch-rivals Barcelona who set the early pace after their demolition of a Levante side which is expected to struggle in the Spanish top-flight this term.

Alves and Pedro doubled the lead in a two-minute spell midway through the first half and Levante found themselves 6-0 behind at the break through Messi's penalty and Barca captain Xavi's slick finish.

The visitors managed to limit Martino's rampant side in the second half, but were again the architects of their own downfall as a defensive error allowed Pedro to add the seventh.

Brazilian talent Neymar was introduced after the hour for his first competitive appearance since a £49m move from Santos, but was unable to net a debut goal in a lively cameo.

Things were less comfortable for Madrid, who went behind to Jorge Molina's 15th-minute opener. Betis, who finished seventh in La Liga last season, created a host of goalscoring chances in an impressive first-half display at the Bernabeu.

Despite hitting the home crossbar through Nosa Igiebor's header, Betis could not add a second goal and went into half-time level at 1-1 after France striker Karim Benzema equalised for Real.

Madrid upped the tempo after the break and rattled the woodwork shortly after the restart through Cristiano Ronaldo's rising shot.

Nigerian midfielder Igiebor wasted another aerial opportunity midway through the second half before Spain international Isco, a £23m signing from Malaga, capped a memorable debut with a powerful 86th-minute header.