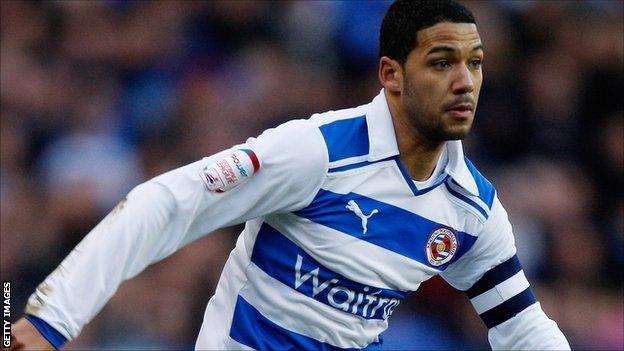 Reading winger Jobi McAnuff says he hopes to end his playing career at the Championship club.

McAnuff, 31, joined the Royals in 2009 and has made 172 appearances since his arrival from Watford.

He began his career at Wimbledon in 2001 and having played for West Ham, Cardiff and Crystal Palace, McAnuff is keen to finish at the Madejski Stadium.

"From my point of view of course I would," McAnuff told BBC Radio Berkshire.

"I've been on record numerous time saying how much I've enjoyed my time here and some of my best moments as a professional have been with this club.

"But it's not my decision. All I can do is do as well as I can on the pitch, it is not solely down to me."

McAnuff, who captained Reading in the Premier League last season, was on the substitutes' bench for their Championship opener against Ipswich but started at Bolton last weekend.

Despite being disappointed at missing out on on a starting spot on the first day of the season, McAnuff is confident he can be a regular in the team.

"In pre-season you come in and work hard and it is all geared up for that first game," he added.

"So it's disappointing (not being selected) but that is football. The squad is so strong we have competition in every position and it is something we have to get on with and deal with.

"The manager makes a point of saying it bears no meaning on the season, it is just a team to get the job done, and as you get older you see the bigger picture and for us this year it is going to be about every single player.

"It is healthy (to have competition), I don't think any player should be guaranteed a place."