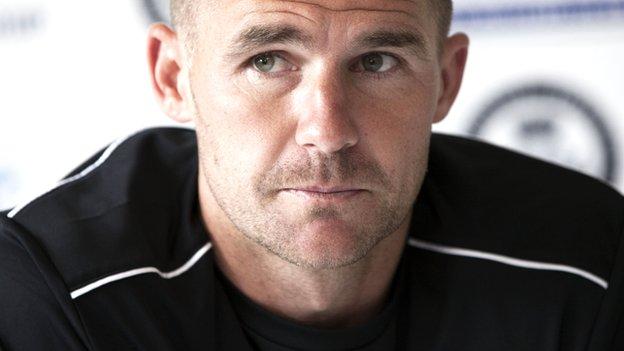 Partick Thistle boss Alan Archibald insists it is too early in the season to consider the game against Hearts as a "six-pointer".

Administration-hit Hearts travel to Firhill on Friday sitting on -12 points in the Scottish Premiership.

Thistle have four points from six following an impressive start to the campaign.

"I think it's just vital that we get a win here in front of our own fans," said Archibald.

He added: "We would love to do that and I think it's too early to say it's a six-pointer."

Archibald also praised the nucleus of the squad that had secured promotion and continued their impressive form this term.

The Thistle boss bolstered his squad with Kallum Higginbotham, Isaac Osbourne, Mark Kerr and John Baird, who all played in the top-flight last season.

But 10 of the players who started in the draw against Dundee United and win over Ross County were at Firhill last season.

And the other, midfielder Gary Fraser, was in the First Division with Hamilton before joining Bolton and then Thistle on loan.

"I think it does make it more pleasing," said Archibald.

"Ten have started out of 11 places. Gary Fraser is the only other one and he is only a young lad as well.

"So, it's very pleasing but we have also brought in a lot of new signings and maybe that has helped as well, the fact it has kept them on their toes.

"The new guys can't get in the team at the moment but they will get their chance."