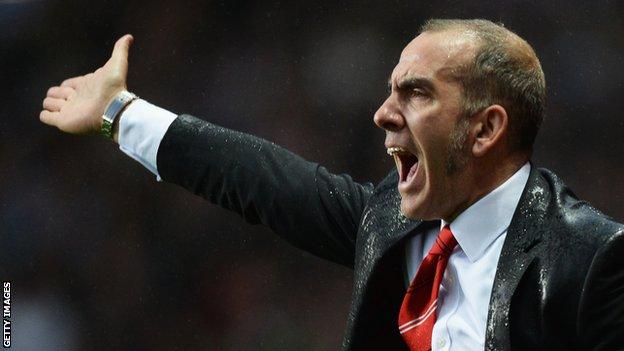 Former Sunderland player Michael Gray says "people with daggers" are waiting for Black Cats boss Paolo Di Canio to slip up at the Stadium of Light.

Di Canio has signed 10 new players since keeping the club in the Premier League at the end of last season.

But Gray believes the 45-year-old Italian's reputation is on the line after making wholesale changes.

"He did what he had to do last season but this is going to be a very big season for him," Gray told BBC Sport.

Among Di Canio's summer signings are Italy international Emanuele Giaccherini, who cost £6.5m from Juventus, and Modibo Diakite from Lazio. Both are expected to feature when Sunderland launch the season at home to Fulham on Saturday.

"This is when he's going to be judged because he's brought in his own players," added Gray, who made more than 400 appearances for the Wearside club between 1992 and 2004.

"Some of the signings come with a big reputation.

"He said the players weren't fit enough last season and he's had an opportunity to have his first pre-season with the new signings.

"The people with the daggers are waiting for him because he is edge of the seat, he is entertainment.

"At the moment they're on his side, they're all on his rollercoaster. At the minute they're going up in the rollercoaster. They're just hoping it doesn't fall off the rails."

Gray is eager to play down expectations at his former club.

Last season they finished 17th, one place and three points above the relegation zone, after two wins and two draws in the last seven matches after Di Canio was appointed on 31 March.

Gray says a top 12 finish would represent a good campaign.

"Everyone is getting excited because they've signed 10 players and people are saying that they're going to break into the top 10 very easily," he added.

"That won't be the case in my opinion.

"You have to look at it as a stepping stone. Yes, the place needed freshening up and Paolo has done great with the players he has brought in.

"I think we'll probably see half of them in the team against Fulham.

"But a successful season would be around about 12th. That's the position they've got to look at."