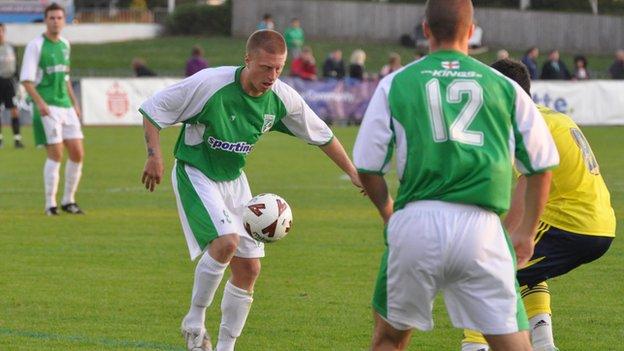 The former Northern Ireland Under-21 international was expected be out for a year, but has been surprised by the speed of his recovery.

Black, who had a metal rod inserted in his leg, told BBC Guernsey: "I've done really well with the rehab.

"I didn't expect it to be quite this early but my training has gone well."

A firm date for a return to competitive action has not been set, but Black is back in training.

"It's about getting some minutes on the pitch and getting used to being tackled and being competitive again." he added.

Black said the support he had received on the island had been an inspiration.

"When I've had injuries at some pro clubs, you are forgotten," he said. "The manager hardly speaks to you.

"Over here it's been completely different. There's been an interest from when I got injured to now.

"They've been very difficult times but fortunately I've had stuff going in on my private life that has helped me through it - having a baby and getting engaged. It was kind of a blessing that my girlfriend was pregnant because that kept me positive."

He added: "If I didn't love playing football I would have given up, but because I enjoy it so much and because of what's happening on the island with football at the moment it's given me desire to get back playing for Guernsey FC shortly."