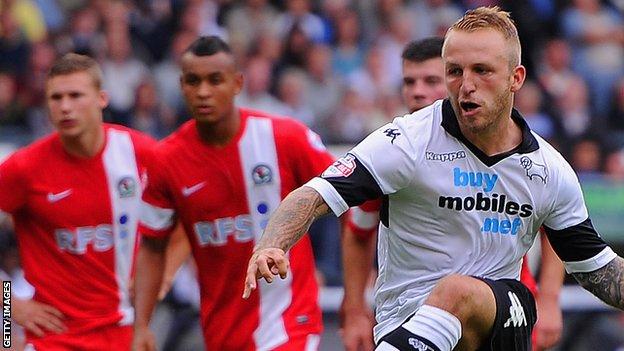 Derby County manager Nigel Clough has told summer signing Johnny Russell to relax as he settles into his new club.

The 23-year-old, who joined from Dundee United, scored in the 1-1 draw with Blackburn, his Championship debut.

"We are delighted with him - he just needs to relax and realise that he doesn't have to impress everybody in first few weeks of the season," Clough told BBC East Midlands Today.

"He will be here for many years we hope - once he settles he will be fine."

The Rams boss added: "We have been delighted with his attitude so far and what we have seen of him."

Clough said the history that a number of his summer signings have with Derby has helped them get off to a solid start this season.

Four of the six additions this term - Chris Martin, Craig Forsyth, Lee Grant and John Eustace - had already spent time at Pride Park on permanent or loan deals in the past.

"Two lads were already on loan with us last season, and those two or three months that Chris Martin and Craig Forsyth had with us helps immensely. It meant that when they came in for pre-season they just slotted back in, no problem," he added.

"Lee Grant was here six years ago, so there was no problem with him. John Eustace has been added, he has great experience and has been here on loan before as well."