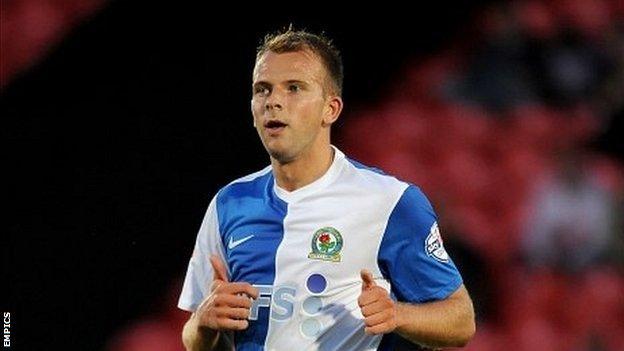 Jordan Rhodes hit his first goals of the season as Blackburn scored four in the first half to rout 10-man Barnsley and seal their first win this campaign.

Chris Dagnall put the Tykes ahead but the match turned when Jean-Yves M'voto was sent off and Tom Cairney equalised from the resulting free-kick.

Rhodes headed his first on the half hour and scored with a lob nine minutes later before Josh King netted a fourth.

Todd Kane made it five and then Tomasz Cywka netted for winless Barnsley.

Barnsley took the lead after 13 minutes when Dagnall turned and scored with a precision strike into the bottom corner.

Three minutes later French defender M'voto was sent off for cynically bringing down Rhodes and Cairney punished the visitors with a wonderful free-kick that found the top corner.

Sustained pressure told when the impressive Kane swung in a deep cross for Rhodes to score with a looping header, and the striker put the result beyond doubt nine minutes later with a cool lob from a Scott Dann long ball.

Rovers got their fourth just before half-time when David Dunn sent Kane clear to set up King to finish from six yards.

Rovers netted a fifth through Kane after Steele somehow managed to palm his shot into his own goal.

Barnsley got a second after 72 minutes when Marcus Pedersen's flick found Cywka who scored from 25 yards, but it was of little consolation for beleaguered Barnsley.

"I think we started very well before the sending off. Their goal was against the run of play but our lads responded magnificently.

"Jordan Rhodes is never going to go down when he's got an opportunity to score a goal. He's a greedy striker and he was clean through [before the challenge from Jean-Yves M'voto].

"The finishing was ruthless. You look at the quality of the goals we've scored and the general play and full praise has to go to the players."

"I got the opportunity to speak to Jordan Rhodes who I know really well and I've seen the incident.

"I've not seen Jean-Yves M'voto having to stretch or panic. He's got the wrong side. Jordan didn't have the pace to get passed him or through him.

"What Jordan's told me is that he's backed into him and propelled himself forward, so he's got a very good decision for his team.

"Has the referee been conned? From what I know now, he has been."