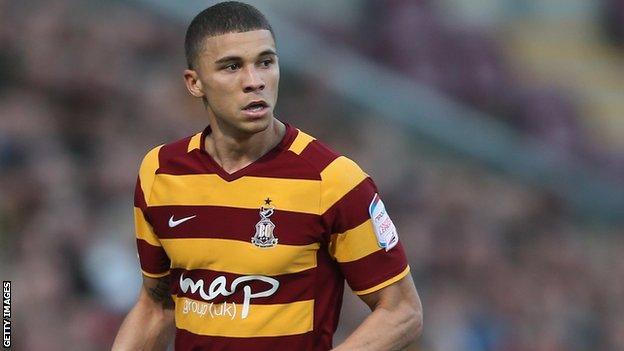 Striker Nahki Wells equalled a Bradford record by scoring in his eighth consecutive game as his double helped the Bantams beat Sheffield United.

Wells put the hosts in front moments before the break with a well-struck shot that had too much power for Blades goalkeeper George Long.

Sub Ryan Flynn almost equalised for the visitors when his deflected shot was saved by Jon McLaughlin.

Wells sealed the points with a late goal from close range.

It had been thought that the Bermudan striker had broken a record jointly held by David Layne, John McCole and Jack Deakin but the record books show that Derek Stokes scored a remarkable 14 goals in eight successive games between Boxing Day 1959 and 6 February, 1960.

Victory for Phil Parkinson's Bradford moved them back into the top six at this early stage of the season.

The Blades, who had much of the play in the second half but lacked a cutting edge, have now failed to win any of their last four fixtures in all competitions and slipped down to 16th in the table.

"It was a very, very tight game. We had a few chances early in the game in the first half and didn't take them.

"They got their goal and made it difficult for us to get back into it because they could sit back a bit and defend what they had.

"The difference probably was a bit of quality at the top end of the pitch.

"I thought it was a good, competitive game and it was always on a knife edge."