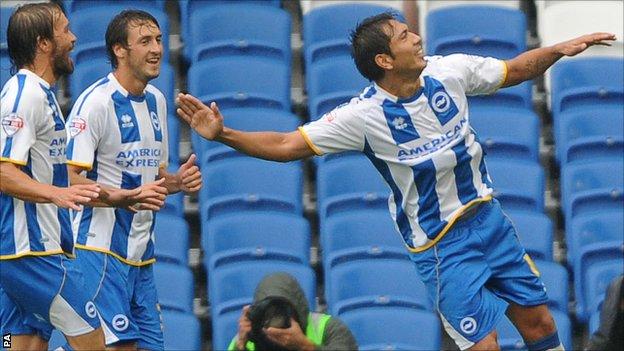 Crofts scored for the second game in a row, firing home from 10 yards.

Will Buckley then fired in a shot from 20 yards for the Seagulls but keeper Tom Heaton was well positioned to save.

But Heaton was then dismissed for two bookable offences before Ulloa made sure of victory for the Seagulls with a header from Buckley's cross.

Ulloa scuffed an early angled left-foot shot wide after being put through by Rohan Ince.

Brighton's Polish goalkeeper Tomasz Kuszczak did well to block a goalbound effort from Danny Ings after Dean Marney cut in dangerously down the right.

The Clarets were relieved to see a rasping low drive from Inigo Calderon go wide after a spell of Brighton pressure, but they were powerless to prevent the hosts breaking the deadlock on 28 minutes.

A surging run down the left by Ulloa had the Burnley defence back-pedalling and, when his low cross came in, Crofts scored easily from 10 yards.

The visitors had a big let-off a minute before the break when Heaton dashed out of the area to bring down the on-rushing Buckley, with referee Darren Sheldrake showing the goalkeeper only a yellow card.

But Burnley were reduced to 10 men on 57 minutes, Heaton shown a second yellow card for handling the ball twice in the process of releasing it under pressure from Ulloa.

The Seagulls sealed the win with a classic centre-forward's goal by Ulloa 17 minutes from time, the Argentine rising superbly to head home a pin-point right-wing cross from Buckley.

"I am very happy to get my first win at home.

"Looking back at the start we made, it was difficult because we couldn't practice many days.

"But during the last two weeks we haven't had a game mid-week and we've been able to practice more."

"Factually I think he [referee Darren Sheldrake] has made the wrong decision [to dismiss keeper Tom Heaton].

"I asked the referee for his view and he said it was for unsporting behaviour, throwing the ball up in the air and catching it twice. I asked him whether he had seen our player impeded in the area.

"The referee has got one chance to look at it and he made a quick decision. Maybe had he spoken to the linesman there may have been a different outcome."