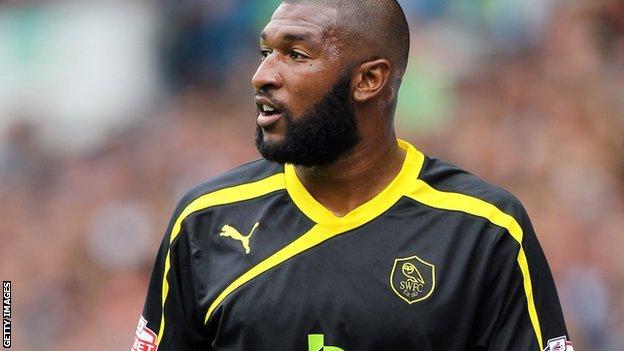 A late Andy Keogh penalty allowed Millwall to pick up their first Championship point of the season, against Sheffield Wednesday.

The Lions, who lined up in Wednesday's old away kit having forgotten their own, went ahead after five minutes through Kamil Zayatte's own goal.

The home side were level two minutes later through Reda Johnson and led when Jeremy Helan drove in from 20 yards.

But the visitors snatched a point when Keogh rolled home coolly from the spot.

The penalty was given after Helan was adjudged to have brought down Richard Chaplow in the area.

Having gone over 10 hours without scoring, Kamil Zayatte's own goal for Millwall avoided an unwanted club record for the Lions

The Owls are winless in any competition this season and things did not look to be going their way when visiting winger Lee Martin found space on the left early in the game to deliver a cross which Owls defender Zayatte could only divert into his own net from close range.

And things got even better for them on 21 minutes as Frenchman Helan found the bottom right-hand corner with a left-footed drive.

Wednesday went close to extending their lead when Austrian striker Atdhe Nuhiu headed against the upright, while Millwall could have equalised but Chaplow failed to hit the target with a free header.

Dave Jones's side looked to be heading for their first league win of the season but striker Keogh had the final say in the 86th minute, sending Chris Kirkland the wrong way to secure a point.

"We got caught with being the wrong side, [even though] it's not a penalty.

"The referee's closer but for some reason the linesman decides he wants to get involved and give it.

"The reason is because we should have seen out the game well before then. And, if were not going to get the third, we certainly don't let them score."

"I thought for long parts of the game we probably controlled it and got the ball down and passed it. Certainly second half we spent most of the time in their half, apart from the last five minutes.

"I think the penalty was probably accumulation because earlier [Jose] Semedo just rugby tackled Scott McDonald to the ground.

"I just don't know how the referee doesn't see that. He's the wrong side, he's got two arms around his waist. Maybe it's from that there that we get the decision, I don't know, but I thought it was no more than we deserved."