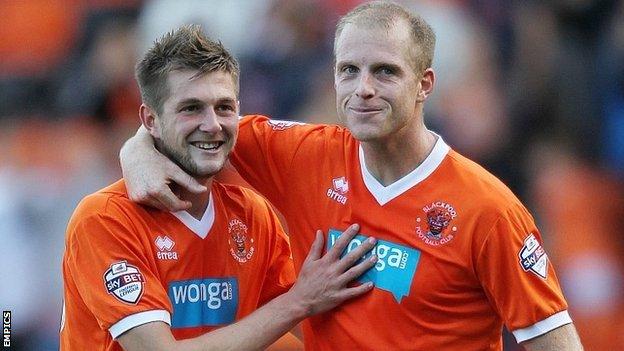 Substitute Tom Barkhuizen scored his first goal for Blackpool to put Paul Ince's side top of the Championship on goal difference.

The hosts had the better of the first half but the Royals went close through Royston Drenthe's free-kick and Jem Karacan's effort that hit the bar.

Matt Gilks saved at the feet of Reading striker Adam Le Fondre after the break.

But, on 75 minutes, Barkhuizen beat two men and fired home to seal the three points for his side.

Tom Barkhuizen's strike was his first for Blackpool, in his sixth appearance. However, he had scored 13 goals during loan spells at Hereford and Fleetwood in 2011 and 2012

Blackpool started brightly and Ricardo Fuller tested Alex McCarthy with a left-foot shot from 25 yards before Neal Bishop headed wide of the goal after good work from Nathan Delfouneso and Angel Martinez.

The visitors rallied at the end of the first half and could have gone into the break 1-0 up.

Drenthe found the unmarked Karacan with a free-kick on 43 minutes, but his left-foot volley was cleared by Gary Mackenzie, before the former Real Madrid man tested Gilks with a curling free-kick from 20 yards.

Moments before half-time, Karacan struck the bar with a lofted effort from the edge of the box after Bobby Grant cleared a corner straight to his feet.

Nigel Adkins brought on Le Fondre for Garath McCleary on 57 minutes and, but for the bravery of Gilks, the substitute would have opened the scoring with a close-range effort following Drenthe's mazy run and cross.

The deadlock was finally broken when 20-year-old Barkhuizen broke with the ball 20 yards out, sidestepped two defenders and netted the winner.

"When you look at us, talent alone won't win you matches, you have to have a bit extra and that's what got us through.

"We lost (Craig) Cathcart, (Isaiah) Osbourne before the game and then (Gary) MacKenzie during the game.

"Ideally, if I had a full-strength squad, Tom Barkhuizen might not have been on the bench. I told him to enjoy the moment and don't think about it too much.

"I thought he'd missed his chance to shoot but he took it so well. His composure was superb, he didn't panic."

"We made a mistake at the back for their goal and fair play to the Blackpool player for taking advantage of that but we've got to be doing better in that situation.

"We wanted a clean sheet and there's no reason that we shouldn't have done that.

"It was a poor goal to give away, but from my point of view we should've done better. We had possession and should've kept it."