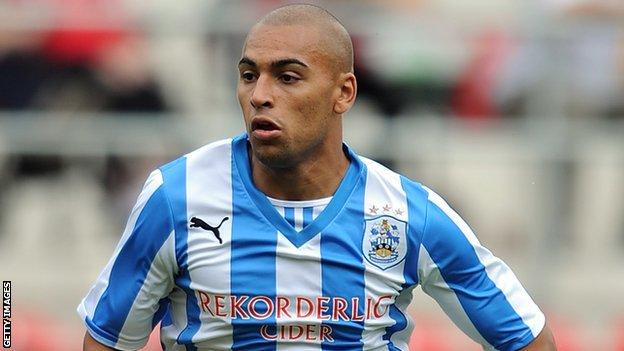 Adam Hammill opened the scoring, beating several defenders for a fine solo goal, before crossing for Vaughan to head home, and Martin Paterson set up Vaughan to make it 3-0 by the break.

Marc Pugh hit a consolation before Adam Clayton's 25-yard rocket made it 5-1.

Hammill and Clayton became the first Terriers players other than Vaughan to find the net this season, with Vaughan taking his total to seven in his last four league and cup games following his summer move from Norwich.

James Vaughan has scored seven of Huddersfield's nine league and cup goals this season, while Lewis Grabban has netted four of Bournemouth's six

Meanwhile, the Cherries were left to reflect on a second successive thumping on the road, after going down 6-1 at Watford a fortnight ago.

Huddersfield's first home win - and boss Mark Robins's 100th league success as a manager - never looked in doubt after Hammill, another summer signing, drilled his shot in off the post.

Visiting keeper Ryan Allsop had to be at his best to tip over a Vaughan volley on the half-hour, while the ex-Everton man missed a good chance for his hat-trick just after the interval, when he pounced on Oliver Norwood's long ball but fired wide.

While they were torn apart in defence, Bournemouth's attractive brand of football did cause Huddersfield problems down the flanks, but they failed to take their chances as the unmarked Harry Arter headed over early on, while lively winger Ryan Fraser set up Brett Pitman, whose overhead kick was blocked by home skipper Peter Clarke.

Top scorer Lewis Grabban was denied by Terriers keeper Alex Smithies, and although Pugh found the net from close range after Francis crossed from the right, the Cherries' afternoon was summed up when half-time substitute Eunan O'Kane lasted only 15 minutes before being forced off with an injury.

"I know it is easy to say it but Bournemouth play good football and caused us problems.

"As a striker I can empathise with how he [James Vaughan] is feeling.

"He is loving it right now and deserves all the success. He is working very hard and concentrating on his game and he is getting his due rewards."

"We like to play good football and there will be no change whether we win, lose or draw.

"This style suits the players we have and this is the only way we want to play. We just have to be better at what we do.

"We showed last season we could get results and keep clean sheets away from home and that's what we must do. We were just unlucky to come up against a striker as lethal as James Vaughan is at the moment."