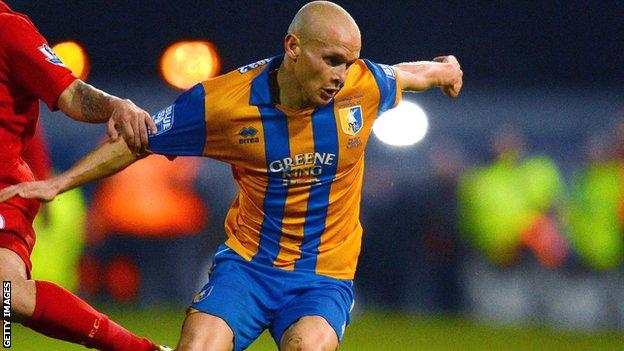 Substitute Lindon Meikle rescued a point for Mansfield in an entertaining draw with Portsmouth.

Ben Hutchinson gave the Stags the lead with a superb 22-yard dipping volley.

Pompey levelled when Andy Barcham grabbed his first goal for the club from close range and his solo run and shot then set up David Connolly who slotted home the rebound from close in.

But Meikle capitalised on an error in the visitors' defence to fire home and grab a share of the points.

The result leaves both clubs in mid-table with five points from their four games.

"I think we played some decent stuff in the first-half and I felt we should have gone in front before they did, but I'm very pleased to come back into the game and take the chances that we did.

"Obviously the goal gave them a lift. We're a big scalp for teams in League Two and we realise that so know when we come to places like this, players are going to be fired up for us.

"I thought what we did magnificently well today was our defending from set-plays.

"We defended our box really well. Mansfield get the ball forward, they get throw-ins, they get free kicks, they put the ball in the box on every occasion they can so you're always going to be under pressure and we dealt with that quite well."