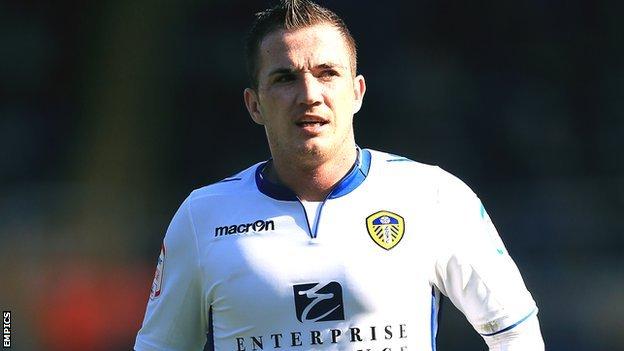 Ross McCormack made one goal and scored another as Leeds came from behind to beat Ipswich Town and maintain their unbeaten start in the Championship.

But Luke Varney's cool finish made it 1-1 after McCormack's 25-yard shot rebounded into his path.

And Middlesbrough target McCormack hit the winner when he cut inside and beat Scott Loach with a low 20-yard effort.

The strike - McCormack's third goal of the season - took a slight deflection off Town midfielder Cole Skuse and then seemed to deceive Loach, but the keeper will probably feel he should have done better.

Leeds had only picked up one point from their previous six visits to Portman Road and scored four goals, with their last victory being a 2-1 success in the Premier League in September 2001.

Town have now lost three of their opening four league games but could easily have been 3-0 ahead ahead by the time Varney equalised.

Ipswich thought they had taken the lead when Aaron Cresswell's low cross was turned in by Jay Tabb following a mis-hit McGoldrick shot, but he was ruled offside.

The hosts did go ahead when Daryl Murphy flicked on Loach's clearance and McGoldrick beat Tom Lees to fire the ball home off the inside of the post.

Lees was then forced to head a Carlos Edwards corner over his own goal and a dominant Town went close to doubling their advantage when Cresswell's 20-yard shot hit the bar.

But Leeds levelled against the run of play when Varney took advantage of a ricochet off Luke Chambers and the visitors looked a different proposition after the interval.

McCormack's 20-yard strike just four minutes after the restart put them ahead and, although Town went close through Chambers and Luke Hyam, Leeds had the slightly better chances.

Paul Green saw a spectacular effort go just wide and Noel Hunt had a fine strike saved by Loach, but the visitors did not the security of a third goal and have moved up to fifth place in the Championship table.

"We should have put them to the sword when we were on top in the first half. But then they got a fortuitous equaliser which changed the course of the game.

"The second goal was a real poor one to concede, from the moment we gave the ball away to the shot.

"He [Loach] came in and apologised - he should have saved it and he knows that. There is no point dancing around the issue.

"Leeds have got some good experienced players and the front three [Varney, McCormack and Noel Hunt] are a real handful.

"They defended doggedly in the second half but we should have made them pay in the first half. If it had ended up 1-1, we would have taken that."

"They were on top for the first 25 minutes and we had to change our shape in the second half.

"We have been 1-0 down [in three league games] this season, but that happens in football. There is good resilience and desire in the dressing room. I thought we were good value for the result.

"Ross is a quality player who scored a quality goal. I don't know how many bids we have had - I leave that to the owners and the player's agent. But I want him to stay and Ross wants to stay. I think selling him to another Championship club sends out the wrong message."