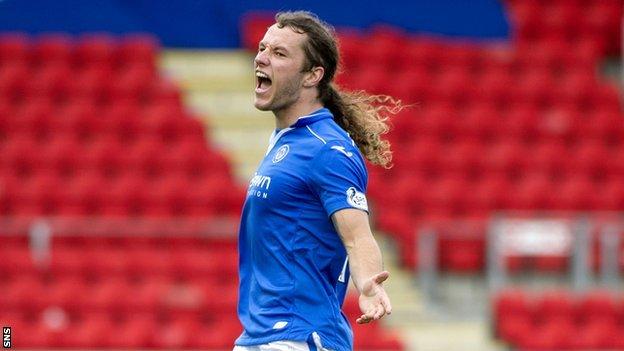 St Johnstone manager Tommy Wright says the club is no nearer to knowing whether striker Stevie May will be at McDiarmid Park beyond August.

May scored in Saints' impressive 4-0 win against Ross County and has been the subject of bids from Peterborough United.

"Since Wednesday there have been no further developments," Wright said.

"I've spoken to the chairman and I feel that we have to put a deadline on it to be fair to ourselves."

The 20-year-old has now scored three times in seven competitive games this season.

"I think we've got to look after ourselves and if he does go, he goes in plenty of time for us to get someone to replace him.

"We might put another nought on it [his price] after today!"

St Johnstone swept Ross County aside comfortably and the fact that came as a surprise is testament to the visitors' excellent form during season 2012-13.

Wotherspoon had a penalty saved but Saints were not deterred and May added the third before captain Dave Mackay finished off the scoring with another well-taken free-kick.

"It was super," Wright said. "Since I've been at the club it's probably been the best performance from start to finish.

"We totally dominated and controlled the game. The number of chances we created caused them problems all day.

"They've set the standard. We are good defensively and we made it really difficult for them when they did have the ball, which wasn't very often."

The energy and creativity of Perth-born Wotherspoon caught the eye on several occasions and the former Hibernian midfielder seems to be playing the best football of his career.

"We try to trust him, tell him to go and play and take the fear out of it, so maybe that's helped him.

"Maybe some players find a club they're comfortable in."