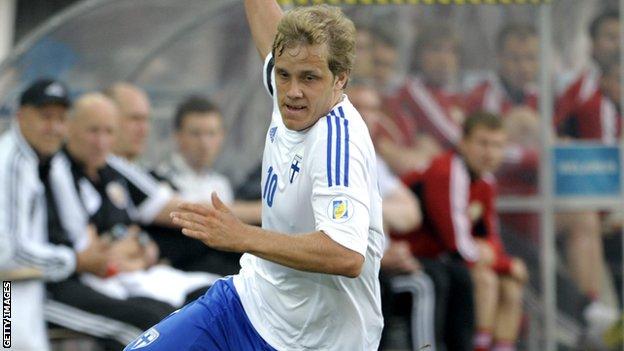 Celtic's chances of signing Teemu Pukki this week could have evaporated after an injury to Schalke 04 team-mate Klaas-Jan Huntelaar.

The Glasgow side are keen to sign another striker before Tuesday's Champions League play-off first leg against Shakhter Karagandy.

But Schalke also have a qualifier, against PAOK Salonica, to negotiate.

And Huntelaar is an injury doubt after going off early during Schalke's 4-0 defeat by Wolfsburg.

We are interested in Marko Arnautovic, but whether there has been a bid in or not, I can't confirm - I wouldn't have thought so

Pukki came on as a second-half substitute during that Bundesliga disappointment and coach Jens Keller is now likely to be less inclined to allow the 23-year-old Finland striker to exit.

The Schalke boss told his club website: "Whether Klaas-Jan Huntelaar can play against PAOK Salonika again, I do not know.

"He felt a twinge in his knee, so I replaced him at the break. We have to see how the injury developed through Wednesday."

Celtic manager Neil Lennon had already admitted that he faced "a bit of a fight" to sign Pukki in time for the match in Kazakhstan having had two bids for the player rejected already.

"At the minute, the selling club aren't selling," he said after .

"We did go in with another offer yesterday, but at the minute they are not prepared to sell.

"We've made other offers as well, but we haven't drawn a line under just yet.

"But it's proving difficult to get him in."

Lennon on Friday also who scored as Heerenveen lost 4-2 at home to Heracles on Sunday, and has now confirmed that Werden Bremen's Marko Arnautovic is also a target.

The Austria striker's agent was quoted in the German media as claiming the 24-year-old had turned down the chance to sign for Celtic after a £3.4m fee was agreed between the clubs.

"We are interested in the player, but whether there has been a bid in or not, I can't confirm - I wouldn't have thought so," said Lennon.

Asked about the qualities of Pukki and Arnautovic, who was an unused substitute as Bremen defeated Augsburg 1-0 on Saturday, the Celtic manager said: "They are two different types of players and both players that we like."

The Celtic squad left for Kazakhstan shortly after the victory at Pittodrie with Lennon keen to stress the size of the task facing his side.

"They've beaten two good teams to get here, so they've got to be respected."

Of the defeat of the Dons, Lennon reflected: "It was a hard-fought win. It took us a wee while to get going.

"Absolutely delighted. It's a massive win for us."