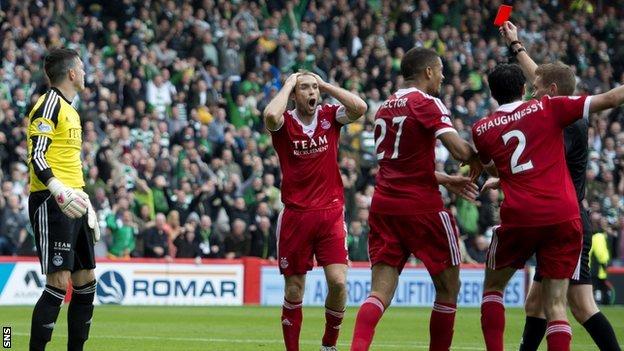 Derek McInnes felt losing to Celtic by two goals was "harsh" on his Aberdeen players but accepted the first-half award of a penalty was justified.

Goalkeeper Jamie Langfield was sent off after felling Georgios Samaras and Kris Commons netted from the spot.

The Dons went into the match off the back of two straight Scottish Premiership wins and McInnes was pleased with how the hosts competed before and after being reduced to 10 men.

"The decision to give the penalty was absolutely right. Jamie has caught Samaras. I'm disappointed we allowed that situation to arise in the first place.

"We just had to make sure we stayed in the game.

"It was a big, big effort from everybody. We've got good players.

"We've got to make sure we kick on. We've got a lot to look forward to. We've got work to do."