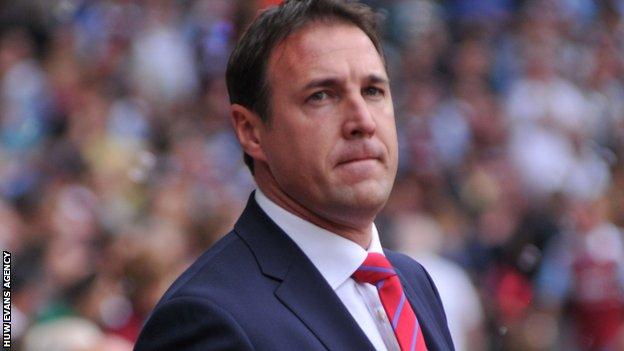 Manager Malky Mackay is confident his Cardiff City side have the "belief within" to compete and survive in the Premier League.

Cardiff City suffered a one-sided at Upton Park in their Premier League debut.

The Bluebirds failed to trouble the Hammers during their return to English football's top flight after 51 years.

"It's not about proving people wrong, but having belief within," said Mackay.

"We are here on merit. We won the Championship and we deserve to be here.

"For large periods of the game, I thought we were excellent and it is about making more right decisions than wrong.

It is day one and we have good belief in the dressing room. We are going to be OK

"It is day one and we have good belief in the dressing room. We are going to be OK.

Mackay, who is in this third season in charge at the Cardiff City Stadium, led his side to the League Cup final in 2012 and to the Championship title this year.

"We didn't start as well as we should, the first 10 and 15 minutes we started poorly and we had talked about how we were going to come out," he said.

"We played against a good team, in a nice stadium and in a great atmosphere and we didn't start well enough.

"Because of that they scored a good goal, but the half an hour before half-time we were excellent.

"We kept the ball and had possession in really good areas and we brought that into the second half.

"For vast periods of the second half we were on top and we limited them to three shots on target all day.

"But that being the case, it is about being clinical and we had a chance at the end and we stick it over the bar."

West Ham's England international Joe Cole and captain Kevin Nolan scored for the home side and they failed to convert a handful of opportunities, while Cardiff did not show a cutting edge in front of goal.

Substitute Nicky Maynard and midfielder Peter Whittingham came closest in the dying moments of the game, but even they failed to hit the target.

"This was never going to be an easy place to come, it never is," said Mackay.

"They defended very well and with numbers.

"They had a few great blocks from strikes we had, but we limited them to three chances on target at home.

"We defended well as a team, but we have to be more clinical."

The Cardiff manager gave debuts to two of their three major summer signings, defender Steven Caulker and midfielder Gary Medel, and was happy with their performances.

"They are what they are and I thought they were excellent," said Mackay.

"I have two top pros and international footballers and I thought they were both good."