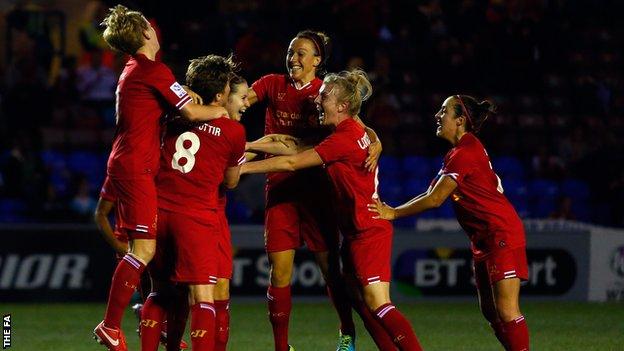 Nicole Rolser hit a late winner as Liverpool beat Chelsea 4-3 to move three points clear at the top of the Women's Super League.

Blues raced into a 2-0 lead through strikers Sofia Jakobsson and Eni Aluko before the home side hit back with goals from Fara Williams and Rolser.

Rolser's seventh goal of the season decided a thrilling game that started with Jakobsson netting after just two minutes when the Swedish striker took advantage of a defensive mix-up.

But Liverpool hit back, with Williams reducing the deficit with a 20-yard free-kick in the 20th minute.

Midfielder Amanda da Costa and Dowie both went close to equalising in the latter stages of the first half.

And 13 minutes into the second half Rolser headed the home side on to level terms.

The league leaders were now pushing for a third goal and Chelsea keeper Carly Telford had to save from Dowie.

But in the 77th minute defender Easton miscued an intended headed clearance into her own net to hand the advantage back to the visitors.

Liverpool were not to be denied, however, and six minutes later Dowie headed in their second equaliser of the night from a Rolser cross.

And Rolser then forced the ball in from close range to give Liverpool victory and the clear leadership of the league.