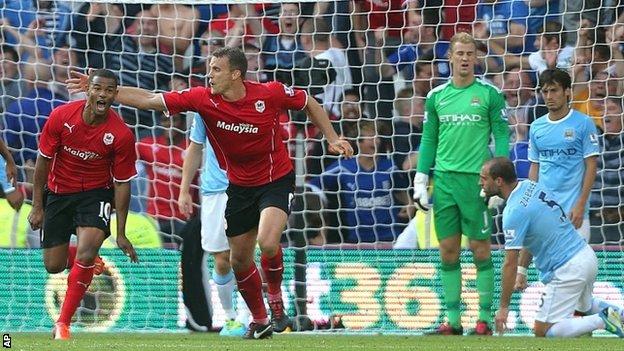 Cardiff City produced a stunning win over 2011-12 champions Manchester City to claim their first victory in the Premier League.

Former Manchester United youngster Campbell then scored twice in eight minutes to put the home side in charge.

Alvaro Negredo set up a grandstand finish, but Malky Mackay's men held on.

The final whistle brought with it scenes of celebration from the packed crowd at the Cardiff City Stadium as the Bluebirds won in the top flight of English football for the first time since they were last there in 1962.

It was also the first top-flight victory for Mackay, who guided his team to the Championship title last season.

But it was a chastening experience for new Manchester City boss Manuel Pellegrini, whose side brushed aside Newcastle 4-0 on Monday but surrendered a one-goal advantage in the Welsh capital.

The one disappointing aspect of the victory over the Magpies was an injury to skipper and defensive lynchpin Vincent Kompany.

And the Belgium international was sorely missed on Sunday, with midfielder Javi Garcia deployed as a makeshift defender.

It was an afternoon packed with emotion - starting even before the game kicked off when a group of fans staged what they termed as a pre-match march to celebrate the club's heritage; one that was synonymous with playing in blue rather than the red that the club's Malaysian owners have opted for.

But no matter their gripe over the club's identity, home fans could have had no complaints with the manner in which their players took the game to Pellegrini's side.

Aron Gunnarsson scored the first top-flight goal for Cardiff City since April, 1962 when Mel Charles finished off their 3-0 win over a West Ham side that included Bobby Moore.

Cardiff had an early penalty appeal and a free-kick from Peter Whittingham that missed the target but, as the first half-hour passed, the often frenetic pace diminished and the visitors came into the game.

At the other end, Campbell could not get the ball under control when well placed and saw another chance snuffed out when Hart blocked his shot.

Pellegrini's side went ahead after the restart when Sergio Aguero's classy backheel teed up the chance and Bosnian Dzeko shot home a ferocious effort from 30 yards.

Cardiff's riposte was swift - and they levelled on the hour mark, eight minutes after conceding.

Kim Bo-Kyung ran free on the right and after Hart blocked Campbell's effort, Gunnarsson followed up and struck from six yards.

That prompted scenes to match the day the Bluebirds secured their return to English football's highest echelon, but what followed topped it all for the home supporters.

Craig Bellamy won a corner on the right that Whittingham delivered and, as Hart hesitated and Pablo Zabaleta stood still, Campbell charged in to score from two yards, the ball appearing to strike his shoulder.

Campbell added his second three minutes from time, heading home following a corner with the visiting defence once more flat-footed.

And although Negredo pulled one back with a quality header of his own during the six minutes of injury time, the visitors could not find an equaliser as Cardiff became the second promoted team after Hull on Saturday to win in the Premier League this season.