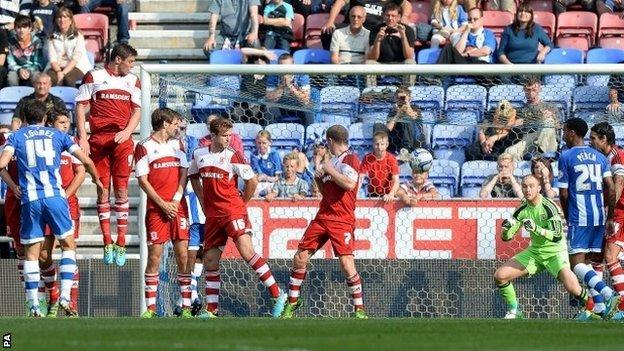 Substitute Jordi Gomez's stunning free-kick with six minutes remaining rescued a point for Wigan against Middlesbrough in the Championship.

Wigan took the lead through Grant Holt, who converted from the spot after Marc-Antoine Fortune was brought down.

Having conceded the penalty, George Friend made amends by equalising with a low drive on the stroke of half-time.

Wigan have experienced an indifferent start to life in the division following relegation from the Premier League, winning only one of their opening four games.

Meanwhile, Middlesbrough - in their fifth season in the second tier - are now unbeaten in the last three games after losing their campaign opener to Leicester.

The home side were the better side early on, and were rewarded for their pressure as referee David Coote pointed to the penalty spot with Friend holding on to Fortune's shirt. Holt made no mistake from 12 yards out.

Boro were looking dangerous on the break though, Lukas Jutkiewicz twice forcing very good saves from Scott Carson, who was making his 200th English league appearance.

But the former Bursaspor keeper could do nothing about the superb leveller, as full-back Friend forayed forward and cut in from the left before unleashing a low shot into the bottom corner.

At half-time, the FA Cup winners paraded their trophy, alongside the Wigan Warriors rugby league side who beat Hull FC 16-0 in Saturday's Challenge Cup final at Wembley.

Owen Coyle's men have been tipped for an immediate return to the top flight, but it was Middlesbrough who seemed to take inspiration from the silverware on show.

Albert Adomah forced Carson into action again, and it was the former Bristol City man who set up Boro's second, crossing for Leadbitter to neatly stroke home.

Wigan lost goalscorer Holt to injury in the second half, but managed to restore parity as Gomez thumped home a free-kick from the edge of the area.

Marvin Emnes could have won it late on for the away side, but saw his shot touched round the post by Carson.