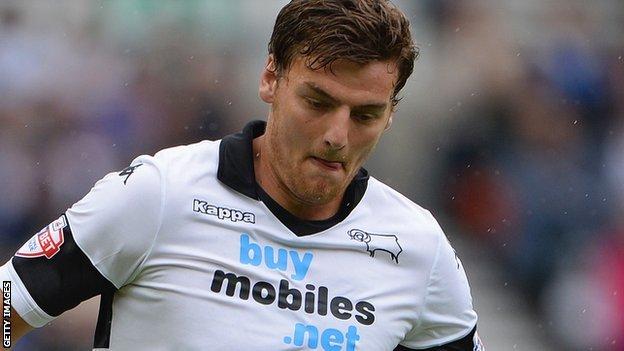 Chris Martin and Johnny Russell went close for Derby before the visitors struck twice just before the break.

Richard Keogh fed Russell to curl the ball past keeper Wayne Hennessey from close range, before Russell and Martin combined to set up Craig Bryson.

When Hennessey could only parry Jamie Ward's 25-yarder on the hour, Martin added Derby's third from close range.

Hennessey was making his first competitive appearance since April 2012 because of injury, having joined the Glovers on loan from Wolves this week.

Another loan signing, Swindon striker Andy Williams, started on the substitutes' bench along with Yeovil's regular strike force of Paddy Madden and James Hayter, as manager Gary Johnson opted for a five-man midfield intent on containment.

But that backfired as Rams trio Bryson, Jeff Hendrick and Will Hughes controlled the midfield, while Yeovil's Michael Ngoo was left isolated in a lone striker role.

Yeovil tried to chase the game after the half-time introduction of Williams and Madden from the bench, in place of Ngoo and defender Alan Tate.

Winger Liam Davis forced a good save from visiting keeper Lee Grant, while referee Keith Hill waved away a penalty appeal from Williams, and Derby's backline held firm as the Glovers drew a blank for the third straight game.

"They started very brightly and we never handled that. They had a couple of bits of clever play that got them in.

"We changed our shape and thought 4-5-1 was going to be more positive than it was, but unfortunately it didn't work out. Some players freeze a little bit and do things very well in training, but all of a sudden it doesn't happen on the pitch.

"We gave it a go in the second half and put them under pressure, but the game was already won. The goals before half-time were demoralising and we weren't quite good enough to get that goal back.

"It's a hard division and there are teams who are much bigger than us but I hope our fans aren't too disheartened. I hope they go and enjoy their Sunday lunch and let me sort it out."

"We started the game well and dominated the first half. We waited around 40 minutes to score despite having a lot of possession, but we got another soon after our first. That second is as good a team goal as I think you will see all season and knocked the stuffing out of Yeovil.

"It's great when strikers get on the scoresheet and we had that today with Johnny Russell and Chris Martin. To score three great goals and get a clean sheet was brilliant.

"Johnny is still settling in but he's got a couple of goals already in the first four matches. There's plenty more to come from him.

"Winning away and keeping a clean sheet is a bit of a monkey off our back. We didn't win too many away last season but our home form was strong, but in the early weeks it seems to have reversed itself.

"I don't think Yeovil will be an easy place for teams to come, they will cause teams problems and you can see that with the way they knocked the ball around in the second half."