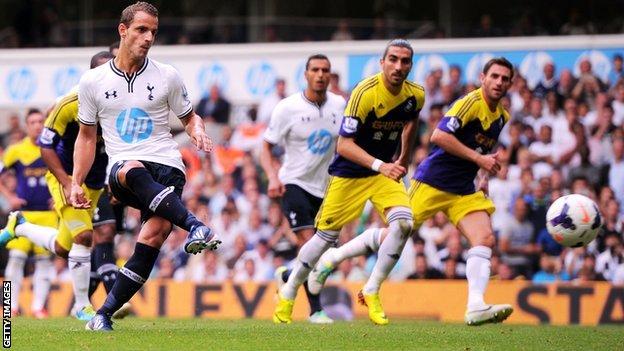 The home side went close when visiting defender Ashley Williams headed against his own post and, from the rebound, blocked a Paulinho shot on the line.

But Spurs took the lead when Soldado coolly slotted in a penalty after Jonjo Shelvey's foul on Andros Townsend.

Swansea belatedly rallied and the closest they came was when a Chico Flores volley was tipped over.

Spurs forward Gareth Bale was conspicuous by his absence from White Hart Lane with the announcement of his transfer to Real Madrid apparently imminent.

However, Soldado is helping ease the disappointment over Bale's impending departure as Tottenham maintained their 100% start to the season against a Swansea side who have now lost both of their league games.

Both sides were convincing victors in the Europa League on Thursday - Spurs beating Dinamo Tbilisi 5-0 and Swansea easing to a 5-1 win over Petrolul Ploiesti.

After the home side shook the sluggishness from the trip to Georgia out of their legs, they were the dominant force, with their four summer signings - Soldado, Paulinho, Nacer Chadli and Etienne Capoue - starting.

The visitors had an early Wayne Routledge shot parried by keeper Hugo Lloris but they spent most of the first half keeping Tottenham at bay.

Williams headed a Kyle Walker cross against his own post and then blocked Paulinho's effort before keeper Michel Vorm gathered the ball.

Spain international Roberto Soldado, a £26m summer signing from Valencia, has scored 17 goals in his last 15 games for club and country.

A pass inside left-back Ben Davies from Spurs central defender Michael Dawson released right-back Walker and he pulled the ball back from the byeline for Mousa Dembele, whose first-time shot was tipped over by the busy Vorm.

Paulinho was putting in a classy performance in the Tottenham midfield but he could not round off his display with a goal. The Brazil international sent a bouncing volley high after another chance came his way from Chadli's cross.

The home side's pressure should have yielded a penalty on the stroke of half-time. Shelvey fouled Townsend on the right side of the Swansea area and, despite referee Neil Swarbrick giving a free-kick, replays show the offence took place in the box.

The disappointment over that decision did not linger long as another foul involving the same players did result in a penalty, which Soldado dispatched with ease by sending Vorm the wrong way.

A far-post Flores volley brought a smart save out of France international Lloris before Spurs regained control of the game and quelled Swansea's threat.

Paulinho had another chance to get on the scoresheet late on when he was sent clear but his first effort was blocked by Vorm before shooting high from the rebound.

However, Spurs secured victory to continue a record which has seen them lose just two Premier League matches since 9 December 2012.

"The free-kick [when Jonjo Shlevey fouled Andros Townsend] was given outside and maybe it should have been a penalty, but the penalty in the second half wasn't a penalty.

"Tottenham are a very good team but they didn't create many chances on goal and they score from that very light penalty.

"They had a couple of chances at the end of the first half but they were created by ourselves, and apart from that they had nothing."