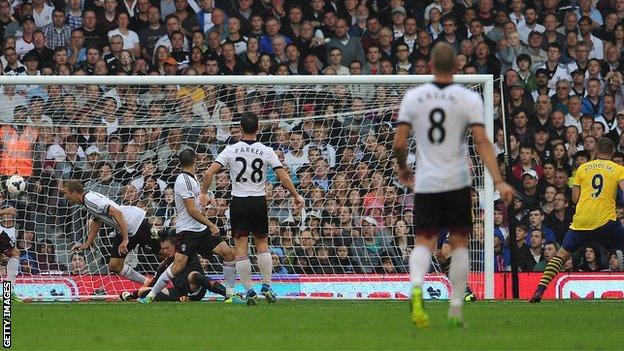 Lukas Podolski grabbed a goal in each half as Arsenal secured a slick and clinical victory over Fulham in the teeming rain at Craven Cottage.

The Gunners, buoyed by a 3-0 midweek win over Fenerbahce in Champions League qualifying, were sharper early on and led through Olivier Giroud's strike.

Fulham have won just three of their 25 Premier League matches against Arsenal, with all three of those victories coming at Craven Cottage.

Podolski made it 2-0 with a measured 18-yard shot and then smashed home the visitors' third after the break.

Substitute Darren Bent pulled one back from close range but Arsenal held on.

Bent's debut strike, after great work by Dimitar Berbatov, gave Fulham hope in the final 13 minutes but Arsenal were full value for a much-needed win which will go some way to erasing the painful memory of last week's home humbling against Aston Villa.

Optimism was in short supply following that demoralising setback, but the impressive triumph against Fenerbahce in Istanbul had raised hopes and the inability to bring in new faces despite numerous high-profile transfer attempts was quickly forgotten.

Eight summer signings for Fulham - including debutant Scott Parker - as well as a battling 1-0 win over Sunderland meant new owner Shahid Khan's pre-match on-pitch appearance was greeted with a real sense of positivity by fans.

A solid midfield base of Parker and Steve Sidwell and the creative talents of Berbatov and Adel Taarabt saw the hosts look to play more expansively but their tactics seemed to play completely into Arsenal's hands and enabled the Gunners to play on the break.

Theo Walcott forced a fine save from the on-rushing David Stockdale after a superb flick over the top from Tomas Rosicky while Giroud had a goalbound header cleared by John Arne Riise.

The pressure told when Giroud cleverly flicked the ball past Stockdale with the outside of his left foot for his third goal in three games, making the most of a very fortunate ricochet from Aaron Ramsey's mis-hit shot.

It was a fine Arsenal performance. They played some lovely passing football, played at their own pace and although Fulham had their moments, Arsenal - with Aaron Ramsey outstanding - were good value for the win.

Berbatov and particularly Taarabt both looked dangerous for the home side as they started to get back into the match. The latter went close with a cross-shot that Wojciech Szczesny kept out and the keeper made a fine stop to deny Damien Duff on the follow-up.

But Arsenal - with Jack Wilshere only a substitute - were controlling much of the midfield battle through Ramsey, and still looked the more threatening.

And after an encouraging 10 minutes for the hosts, Arsenal made it two four minutes before the interval when Podolski brilliantly steered the ball home at pace from 18 yards after Stockdale had done well to keep out Walcott's initial effort.

Podolski should have added a third in the final seconds of the first period, but was caught in two minds and the ball rolled harmlessly across goal.

The Cottagers, who have now lost their last five Premier League home matches, almost pulled a goal back immediately after the restart but Szczesny did well to keep out Taarabt's low strike.

Fulham started to dominate possession but Arsenal always looked likely to exploit the gaps in defence as the home side attacked, and they added a third when a wonderful piece of control by Giroud in the centre of the pitch led to Podolski firing a low cross-shot into the far corner.

The hosts persisted though and at least had something to cheer when England international Bent turned the ball in from a couple of yards out after a superb piece of control and instant shot from Berbatov.

"They are a good footballing team and to get a goal like the first one was a bit lucky, but they will give you a few problems.

"We kept going in the second half and if we had scored early, we could have done something about it.

"We lacked a cutting edge up front. But they have the pace up front to punish you, which they did.

"But the mentality was good. Bent scored and did well, Parker did well and Taarabt did well. But maybe we need a few days to gel."

"We were impressive and always in control. We deserved the win and it's a good win. We had a convincing win against Fenerbahce and that was a good response to the disappointing first result [against Aston Villa].

"We played the way we wanted to play, we were in control and the team enjoyed it. We created chances.

"The positive result [in Turkey] counter-balanced the fatigue. We were very dangerous every time we won the ball back. We had a good mixture of a patience game and a speed game - and that was positive."