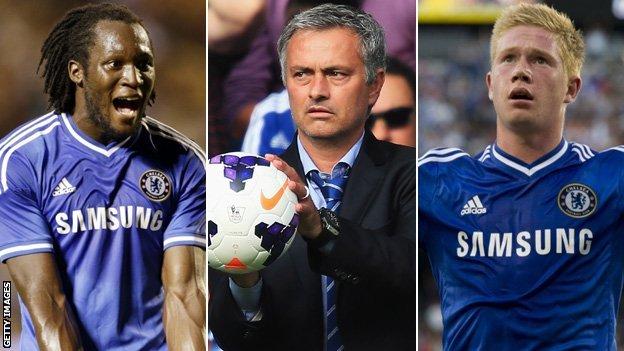 Buoyed by the adulation surrounding their manager's reappearance, a confident Chelsea were thwarted by an early penalty save from Hull keeper Allan McGregor, before Oscar and Frank Lampard put them two goals up by the 25th minute.

Mourinho introduced new faces, such as Andre Schurrle, and gave Romelu Lukaku, back from a season-long loan at West Brom, the chance to impress in the second half.

Former Chelsea winger Pat Nevin, speaking to BBC Radio 5 live, assessed what was new, and what was familiar about the return of "The Special One".

Mourinho stayed very much with the system and style of the previous manager, Rafa Benitez, with a similar 4-2-3-1 formation.

It was clear that Mourinho was trying to get an extremely high tempo from the start. At times last season, Chelsea jogged into games, but he is not going to allow that to happen.

If it gets dull in the first 15 minutes of the second half, Mourinho will not be afraid to change it because he has a bench of people who want to give it a go.

I think Stamford Bridge was a good place to have a season ticket last season. I know there was a bad feeling about Benitez, but I thought it was a very entertaining team. Bring Kevin De Bruyne into that team, with Eden Hazard and Schurrle, and you are really going to enjoy it. I'm not saying Chelsea are definitely going to win the league, but people will not get bored.

Chelsea owner Roman Abramovich brought the manager back to get celebratory football and excitement, to get games where they win four-, five- or six-nil - which looked as if it could have been on.

Former Scotland international Pat NevinBBC Radio 5 live
This is going to be a tight league. Goal difference will matter and Chelsea should get all the goals they can

Mourinho often makes tactical adaptations during matches, but in the past it was to sit someone deeper. Now it looks like his changes will be to get Chelsea to press on. I think he will be urging them to win games three- or four-nil. This is going to be a tight league. Goal difference will matter and Chelsea should get all the goals they can.

In the second half, it looked like an old Chelsea-Mourinho performance. They did just enough, they were not hurting themselves a great deal, and maybe looking to Aston Villa on Wednesday.

Lukaku will have a big role

I was slightly surprised Lukaku did not get the call, I thought he would have started instead of Fernando Torres.

He played against very good teams in pre-season, like Roma and Real Madrid, and, today, Lukaku looked the better of the two. At 20, he is the future of Chelsea.

Lukaku looked fantastic and did a huge amount when he came on, while Torres looked tired again. Lukaku will be called for by Chelsea fans if it's not working because they have seen that he can add something.

Based on his first-half performance, De Bruyne, who is only 22, is going to test Juan Mata, Oscar and Hazard.

Kevin de Bruyne's mother was born in Ealing, west London, making him eligible to play internationally for England. However, he opted for the country of his birth, making his debut for Belgium in August 2010 while still a teenager

Those three will not start all the time and De Bruyne looks good enough. He had great vision and energy, and a touch more power than those three. He can be delighted with how he played on Sunday.

Marco Van Ginkel is an out-and-out sitting midfielder, and I expected him to start against Hull. I think he will be a massive player for Chelsea this season, allowing them to play a 4-1-4-1 without two deep-lying midfielders. He is such a specialist in that area.

We didn't see much of him or Schurrle, who I saw a bit of in pre-season. He looks like he will fit in just fine and will bring decent pace up the wing.

Every one of these young players is improving and there are exciting times ahead for Chelsea.