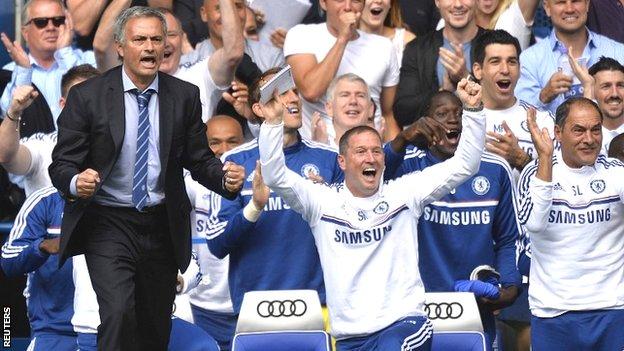 Chelsea manager Jose Mourinho has said the club will try to sign a new striker until the transfer window closes.

Mourinho, whose second spell as Blues manager started with a 2-0 win against Hull, has seen rejected by Manchester United.

"I won't name players who belong to other clubs. We go direct to the club," said Mourinho.

"We will try until the last day of the transfer window to add a new player to the squad. A striker."

Chelsea have already recruited Andre Schurrle and Marco van Ginkel, while fellow midfielder Kevin de Bruyne has returned from a loan spell with Werder Bremen and striker Romelu Lukaku has come back to the Blues after a season-long loan at West Brom.

Mourinho added that he wanted to sign more players before the 23:00 BST deadline on 2 September, adding they will do it in a proper manner.

"If we have to make a bid we make it in an official way, we don't speak to players and try to influence them," he said.

The Portuguese celebrated his return to Stamford Bridge as Chelsea beat newly promoted Hull with goals from Oscar and Frank Lampard.

England midfielder Lampard also had a penalty saved by Hull goalkeeper Allan McGregor, and an improved performance from the visitors denied Chelsea any goals in the second half.

"Maybe we couldn't do the same [in the second half] as the first," said Mourinho, who led Chelsea between 2004 and 2007 before spells in charge of Inter Milan and Real Madrid preceded his

"The first half was too intense, creative and dynamic for the first game of the season. We started in an amazing way and not even a missed penalty could break our intensity and quality. It was fantastic.

"I've played so many games at Stamford Bridge with Chelsea and we didn't play many with the beautiful quality of the first half."

Mourinho played attacking midfielders Oscar, Eden Hazard and De Bruyne with Schurrle and Juan Mata among the substitutes, while Victor Moses was not named among the 18.

"We have six players for three positions," added Mourinho. "It's special because it gives me the opportunity to change from match to match and for different opponents. The very base of these three players creates our football."

Mourinho also praised the Blues' supporters, who gave him a rousing ovation.

"The fans were fantastic, it gives me even more security that I have already about my decision to come back," he added.