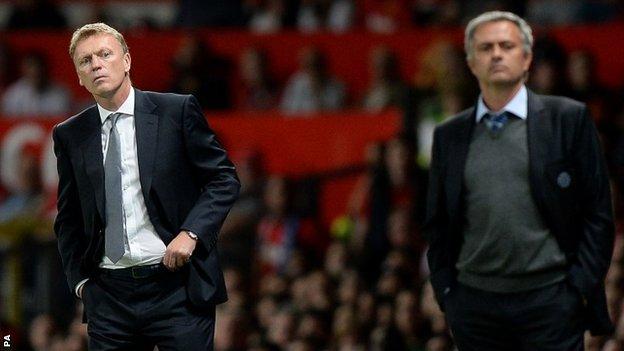 The much-anticipated meeting between Manchester United and Chelsea ended in anti-climax as Old Trafford witnessed its first goalless draw in the Premier League since May 2009.

David Moyes was taking charge of his first competitive home game since succeeding Sir Alex Ferguson as Manchester United manager, while Jose Mourinho had his sights sets on a third successive league win since returning to Chelsea.

In the end, despite an outstanding performance for United by the recalled Wayne Rooney, both Moyes and Mourinho had to settle for a point in the first blank scoreline here in 77 Premier League games, since United clinched the title against Arsenal in 2009.

Rooney was the game's most dangerous player and was vociferously backed by United's supporters throughout - as well as receiving vocal support from the travelling Chelsea fans who still hold out hope he can be lured to Stamford Bridge despite Moyes' insistence he would not be sold.

It was a game short on clear-cut chances and quality, with United's Danny Welbeck wasting the best opportunity when he shot wide just before the hour.

Mourinho will be happier with the point but there was frustration for Moyes, who would have hoped to make a winning start at Old Trafford as he starts the task of retaining the Premier League won by Ferguson before his retirement.

Rooney's discontent at Old Trafford provided much of the sub-plot before the game but Moyes was happy to select Mourinho's top transfer target and was rewarded with a fine personal performance.

Mourinho's selection was perhaps more of a comment in his lack of faith in his strikers as Fernando Torres and Romelu Lukaku were left on the bench and Demba Ba was not in the squad.

Perhaps the biggest surprise was the absence of Juan Mata, and the likes of Kevin De Bruyne and Andre Schurrle did little to suggest they were worthy of selection ahead of the Spain star who has illuminated Stamford Bridge.

The two managers greeted each other warmly on a night of high expectation that was not fulfilled, particularly in a turgid opening half.

Robin van Persie lifted the tedium with a shot into the side-netting while the lively Rooney forced Petr Cech to save low down. Chelsea's only serious response was a snap shot by Oscar that was easily dealt with by United goalkeeper David de Gea.

Rooney created United's best chance so far by playing in Welbeck in the area in the 58th minute but his finish was poor, much to Old Trafford's frustration.

Moyes made a change of his own when Ashley Young replaced Antonio Valencia and he instantly produced two fine crosses that required a fine headed clearance from John Terry and a desperate scramble from Cech.

Rooney had been, by some distance, United's biggest threat and the crowd rose to him once more when a 25-yard effort brought a fine diving save from Cech.

United tried to mount a trademark late charge but Van Persie was denied by a fine block by Branislav Ivanovic in stoppage time.