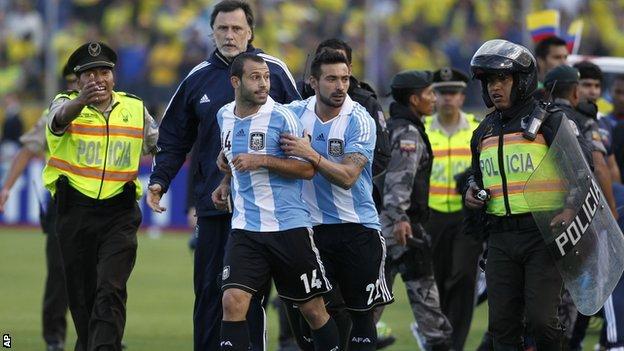 The start of the Spanish campaign could hardly have been more gentle for Javier Mascherano, watching from the other half as his Barcelona team-mates ran in seven goals against Levante.

But come the end of the season he is likely to be right in the thick of the battle with a crucial role to play.

The spotlight inevitably settles on Lionel Messi in Argentina's quest to win next year's World Cup. But last week's friendly win in Italy reinforced the view that, in his own very different way, Mascherano is every bit as important to his team's chances.

The stereotype is of Mascherano the warrior, the little enforcer who stomps through matches at the limit of emotional intensity.

Indeed, when I first saw him, representing Argentina in the South American Under-20 Championships at the start of 2003, this was my initial impression.

I recall a match against Paraguay when Argentina were down to nine men, a situation Mascherano seemed to relish. He came across as a footballing version of the great world boxing champion Joe Frazier - the more intense the battle the more he enjoyed it.

But even in that tournament it was clear there was a lot more to Mascherano.

Argentina certainly thought so: a few months later he was given his senior international debut before he had even made a first-team appearance for River Plate. Within a year it had become impossible to imagine an Argentina side without him, because he offers so much more than mere combat.

It was Mascherano's all-round excellence that inspired Pep Guardiola to take him to Barcelona, and to deploy him in the back line.

The coach understood that in addition to his defensive awareness, Mascherano has a quick, accurate, crisp pass, reads the game well and is adept at taking sound decisions under pressure - perfect for a team that seeks to defend high and build from the back.

Eyebrows were raised, nevertheless, when he was first selected at centre-back, but it has proved a resounding success.

Argentina are unlikely to go down the same road - Barcelona push up so much that Mascherano's lack of height is not a major problem. But he is too short to play at centre-back for a team that defends in its own penalty area.

It is just conceivable that Argentina coach Alejandro Sabella might deploy him in a back three. Much more probable, though, is that for his country he will continue to operate in his natural holding role, as he did to such good effect in Rome last Wednesday.

Mascherano was outstanding as Argentina, without Messi, beat Italy 2-1. He organised those around him, cleared up the danger and knitted the side together with his passing.

Indeed, the only time that Argentina's win was in doubt is when he was substituted with just over 15 minutes to go. Within 60 seconds Argentina gave the ball away in that space in front of the centre-backs, allowing the Italians to pull a goal back.

Nevertheless, coach Sabella made the right decision when took Mascherano off. He needed to have a look at how his team would cope without the presence of their talismanic number 14. When World Cup qualification resumes next month Argentina will travel to Paraguay without Mascherano. The former Liverpool man is suspended. Again.

Argentina will almost certainly seal their World Cup place in that game on 10 September. Indeed, if other results go their way they will do so even before taking the field for their 14th match in the campaign - the third that Mascherano has been forced to sit out.

He missed the opening game (at home to Chile) because he had been sent off in his side's previous competitive game, the 2011 Copa America quarter-final against Uruguay. And an accumulation of yellow cards meant he was absent from last September's home match against Paraguay. He now misses the return fixture because he was sent off in bizarre circumstances during an away game in Ecuador.

Javier Mascherano started his career at River Plate, making his Argentina debut before his club bow, before moving onto Corinthians, West Ham, Liverpool and Barcelona

The game in Quito was tied at 1-1, and the home side were turning the screw in the closing stages. Mascherano went down injured, perhaps in a bid to slow down the rhythm of the match, a common enough ruse of away sides at altitude. On came the cart and as it tried to wheel him quickly away, Mascherano kicked out at one of the stretcher bearers. The referee saw it, and reached for the red card.

The player later confessed that he had been in the wrong. And his absences during qualification have not harmed Argentina's campaign. But that will not apply next year - if Mascherano keeps picking up cards in the World Cup it could have a serious effect on his team's prospects.

At home to Chile or Paraguay, he can be replaced. He might be missed next month away to a Paraguay side rejuvenated by last week's splendid draw against Germany, but it hardly matters. Next year in, say, a World Cup quarter-final, it might matter very much. A repetition of what happened in those last 15 minutes against Italy could lead to elimination.

Almost as important as the form of Lionel Messi, then, will be the emotional control of Javier Mascherano. If he can rein himself in and belie the warrior stereotype then Mascherano can supply the footballing nous to balance out the side, and Argentina's collection of attacking talent can do the rest.

Q: Why is Carlos Tevez no longer being considered for Argentina? He was obviously disruptive (and his career disrupted) for a good part of his time at Manchester City but there was no doubting his quality and commitment when on the pitch. Now that he will presumably be playing regularly for Juventus will he come back into consideration? Is there a non-playing reason for his being dropped? How can the vastly inferior (and older) Rodrigo Palacio be considered a better option?

A: His record for Argentina is not very good, and he did himself few favours a couple of years ago during the Copa America - public opinion got him back into the team, he then played poorly, had a moan about the position he was playing and missed the vital penalty in the quarter-final shoot-out against Uruguay.

I'm not sure he has much of a relationship with Messi - indeed, Messi seems happier with Tevez out of the squad. The two of them have never really fired together. It is very hard to see him getting back in for the World Cup, and Tevez seems resigned to this.

Q: What are your impressions of Juan Luis Anangono? My team, Chicago Fire, recently signed him and, while he has played a couple of competitive games, not much is known about him yet. He seems to be on the cusp of the Ecuadorian national team, so there is hope he will produce, but the Fire have had a poor track record of signing relatively unknown South American recently: Rafael Robayo, Federico Puppo, Cristian Nazarit, Flaco Fernandez all came and went in the past three seasons without playing a full season and with little impact on the pitch. The hope is Anangono does not end up another name on the list.

A: I would be pleasantly surprised if he is a big success. He's a bit similar to Nazarit, the Colombian striker you had for a while - physical, big and awkward but no great shakes technically. I would love to be proved wrong, but I don't see him as a consistent goalscorer.