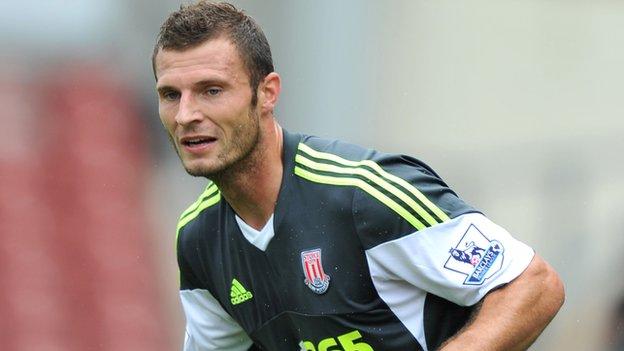 Stoke City debutant Erik Pieters claims his team played well enough to have come away from Saturday's 1-0 defeat by Liverpool at Anfield with a point.

The Potters were kept in the game by an inspired display from visiting keeper Asmir Begovic.

But, in the end, it was only a late penalty save by new Liverpool keeper Simon Mignolet that secured a home win.

"It's too bad we missed the penalty in the 88th minute but it was a good first game for us," Pieters told BBC Stoke.

"But our defence was good, we had some chances to score and, even though we lost, we deserved one point. It's just too bad they scored one more than us."

But for Begovic, and a great goal-line clearance by Dutchman Pieters on his debut to deny Daniel Sturridge, as well as a string of other missed openings, Liverpool might have scored more than once.

They created 26 scoring chances, including two efforts against the woodwork.

But, while two of Stoke's four on-target efforts came in the late penalty incident, with Kenwyne Jones' effort from the rebound was also well saved by Mignolet, Stoke also hit the woodwork in the first half through defender Robert Huth.

And, apart from the result, 25-year-old Pieters, Mark Hughes's first signing when he arrived from PSV Eindhoven for £3m in June, was pleasantly encouraged by his first experience of Premier League football.

"I know a lot already about what it is like to play in the Premier League from my friends who play here and said I had to come," he added.

"It was really great to have the Stoke fans with us. It was good support. We heard them for all the 90 minutes."